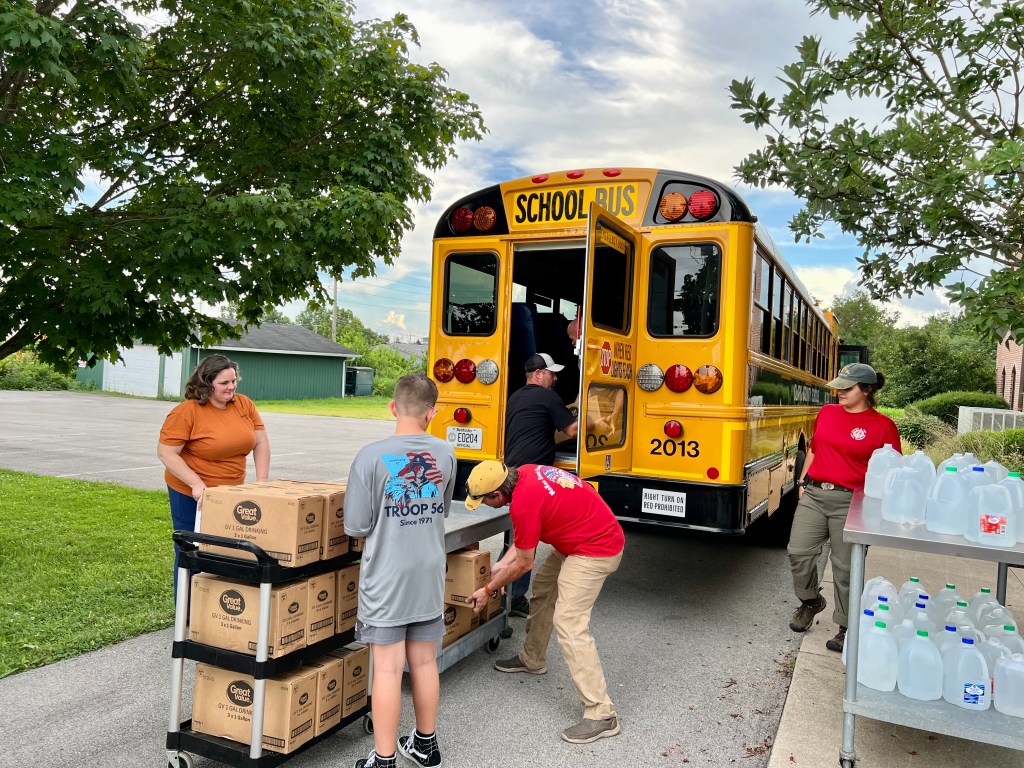 It’s been said that when hard times arrive, communities come together.

In what’s been described as a county-wide collaborative relief effort, different scouting units – Boy Scout Troop 56, Venturing Crew 56, Troop 562, and Cub Scout Pack 56 – have banded together to help those in the eastern Kentucky region, most notably Knott County. The units are chartered out of Emmanuel Episcopal Church.

“Initially, the troops started collecting supplies on Saturday [July 30th] because we have a scout family who lost a loved one in the floods in Knott County”, said Committee Chair Misty Gay. “Then, business owners in the downtown community heard about us doing this, and they helped.”

During the initial trip, which took place the next day, the downtown community raised approximately $1,000.

With a box trailer filled to the rim, two pickup trucks, and half of a Toyota 4Runner loaded up; the group headed to Knott County.

“When we got there, I was surprised to see how little they had,” Gay said. “Really, they had just started their relief efforts. In my mind, the floods happened on Wednesday. However, the water didn’t recede until Friday so that they could start their relief effort.”

Arriving to find many individuals without basic needs, they began unloading supplies – which caught the attention of more than just onlookers.

FOX Weather also was made aware of the situation and included their story.

The groups also had an opportunity to come across Governor Andy Beshear, albeit somewhat humorously.

“It’s kind of a funny story. The governor’s black SUVs all pulled up there at the church, and our scouts were helping to unload vehicles as they pulled up,” Gay said, not initially realizing who was in tow. “We were like, ‘Oh, do we need to unload the Secret Service?’ and one of the guys with an earbud said, ‘We are the secret service’”.

While the initial trip was a success, not all have been completed.

The troops made another journey out of town on Friday morning, leaving for Letcher County High School at 9:00 a.m. with the help of a bus provided by the Clark County Board of Education.

This time, they also included items that may be needed in the cleanup efforts, such as rakes, brooms, buckets, and around thirty or forty shovels.

Anticipating that mold would become a cause for concern, Clark Regional Medical Center became involved.

“I know that [they] brought out three cases of hazmat-type suits because that’s going to be the next thing,” said Gay. “We’ve got the heat coming this week, and then after the water comes the mold. That’s their really big need right now is [personal protective equipment] to help clean up…[Respirators] is a huge need that we’ve been unable to meet.”

Gay is a West Liberty native who witnessed the devastation that an EF-3 tornado caused in her hometown in 2012, and that gave her the heart to assist in disaster relief comes easily.

As their mission continues, the troops also look to develop a passion for it.

“Service to others is part of our scouting program, and it’s really good to have our kids experience these things and helping each other to understand better what it means to give joyfully to someone else,” said Gay. “They have been nothing but hard-working and helping. It’s really good to see that.”