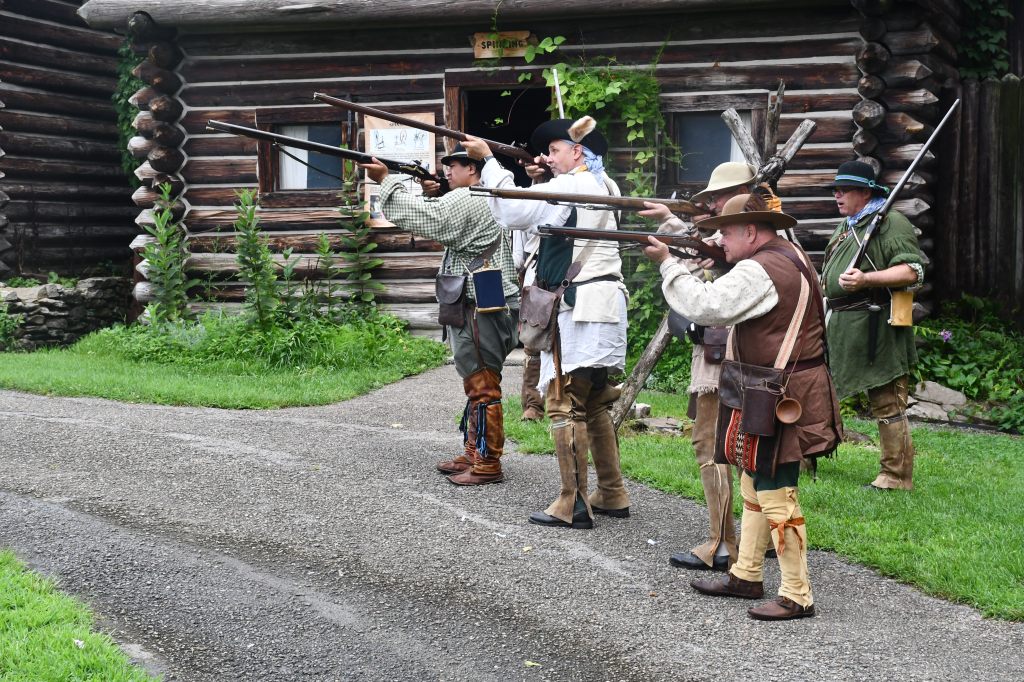 Always one to celebrate the legacy of Daniel Boone and the pioneer days of the late 1700s, Fort Boonesborough welcomed a group of volunteer historical interpreters from Captain John Holder’s Company Boonesborough Militia last Saturday.

The group consisted of former military leaders, teachers, and more.

“All of us have just this interest in Kentucky frontier, early Kentucky history, and stuff like that,” said Ron Koontz. “Most of us have done reenacting in other timeframes to the time period stuff I get, but our love was this time period.”

Though helping to lead the company, Koontz works full-time as the assistant principal at Bethlehem High School in Bardstown.

Highlighting their visit was a drill in which members lined up and fired off shots from muskets, loaded with gunpowder but no actual bullets, to allow viewers to envision better what it was like in the 18th century.

Koontz, a former history teacher, believes it’s important to connect students and adults with an understanding of the past.

“I’m a firm believer that you’ve got to study and know something about your background … At least have an idea, an appreciation”, he said. “We want them to see and have an appreciation of the Kentucky frontier of the 1700s.”

Disbanded initially in the early 2000s, John Holder’s Company was started again in 2018 – after applying through the Northwest Territory Alliance and completing other tasks.

They brought additional memorabilia and historical items to show viewers, such as a Kentucky long rifle, French and British muskets – commonly called the “Brown Bess,” a powder horn, fire kit, tumpline, and much more.

Certain items, such as a noggin typically used for drinking water, have been discovered only recently. Plus, leather work and other items are created by members today. Each has been documented carefully and in extensive detail.

Elsewhere in Fort Boonesborough, volunteers and full-time workers continue to make the location as historically accurate as possible.

This is done through workstations such as blacksmithing, pottery, and spinning. In contrast, the last year saw a garden planted featuring okra, sweet potatoes, tobacco, corn, squash, beans, onion, cucumbers, and even zucchini.

Brenda McKnight, a weaver, has overseen the management of the garden.

“We try to grow things that were grown during this time period for the settlers that had traveled into Kentucky,” McKnight said. “Lots of the people were hungry at times, and starvation was an issue.”

At Fort Boonesborough, Daniel Boone’s legacy continues to carry on.

“He opened the West,” said Steve McKinney, Parks Program Services Supervisor at Fort Boonesborough State Park. “His explorations and his hunting forays into the wilds of North Carolina and Kentucky really created a path for other people to follow.”

As for Captain John Holder’s Company Boonesboro Militia, it won’t be the last time they’ll be present to make history come alive.

“It’s just something we all love doing,” Koontz said. “Some of us have been doing it since the 1970s.”