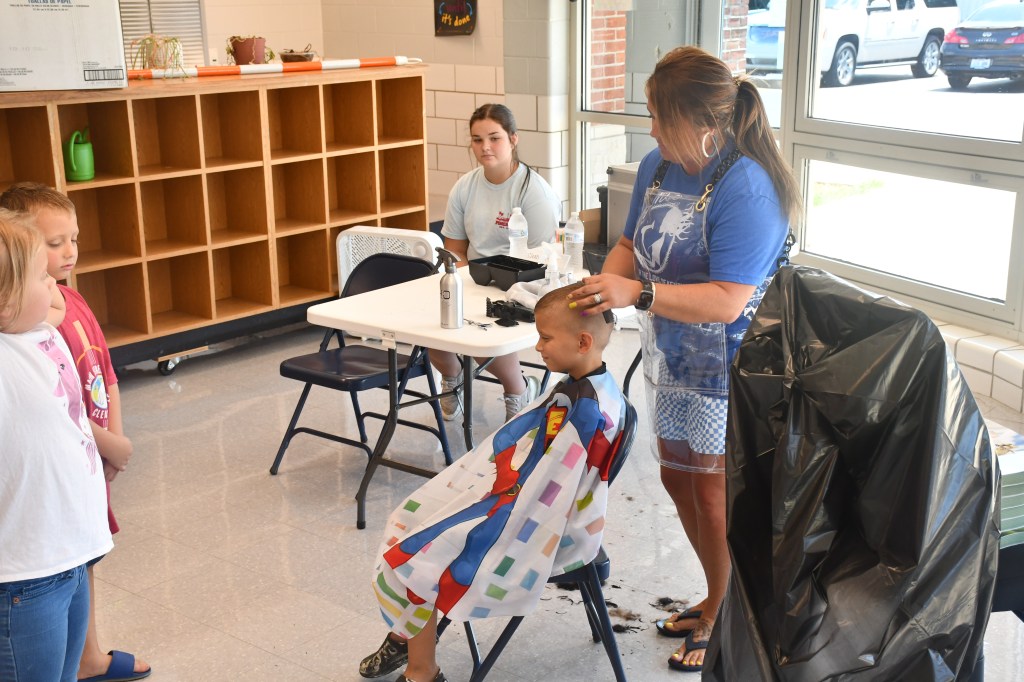 Like Halloween, Christmas, and Easter, the first day of school only comes yearly, and each student and their parents hope to see them make a positive impression.

Following a warm and muggy summer, free haircuts were offered Tuesday afternoon at Shearer Elementary School off Broadway Street for all grade school students starting with kindergarten and going through the fifth grade.

“So many families are just struggling in the area, and we wanted to make sure that all children had an opportunity to get a new haircut before school,” said Kristy Carter, the school’s Family Resource Center Coordinator. “We reached out to our community partners, and they were more than gracious to volunteer, so we’re happy to do it.”

Lines of adolescents waited to receive a trim while coloring books and other activities were available to keep both parents and kids preoccupied.

Ashley Overbay, a mother of five, including four girls and one boy, brought in her children early.

“I think it will give them confidence and just make them feel good about themselves,” said Overbay. “They’re having a lot of fun seeing some of the friends they’ve missed over the summer.”

Doing the work on hand at the start of the event was Glam Hair Salon, owned and operated by Stacey Dobbs.

“Someone gets excited about getting their hair done. You just feel good”, said Dobbs. “I just decided we’re going to give out free haircuts, and they’re going to feel good on their first day of school.”

Her daughter Kylie Dobbs assisted with applying hair stencils – a growing fad that has seen recognition on sites such as TikTok.

Finishing the work later in the day was Dezi Broyles, owner of Hair and Massage by Dezi, located off of Waterworks Road.

Having the event at Shearer Elementary School may be a recent development, but the idea has been in play for some time.

Glam Hair Salon had previously hosted its own version of offering free haircuts, which turned out to be a huge success.

“I actually do Kristy’s hair, and I suggested [the idea] two years ago before COVID, Dobbs said. “I was talking to Kristy and I said, ‘Has anybody approached you about doing anything like that?”She said no.”

For Carter, it’s an opportunity to make the transition from summer into the school room much more effortless.

“A new haircut just gives everyone a fresh boost,” she said. “We want to do whatever we can do to help relieve some of the stress from our families.”