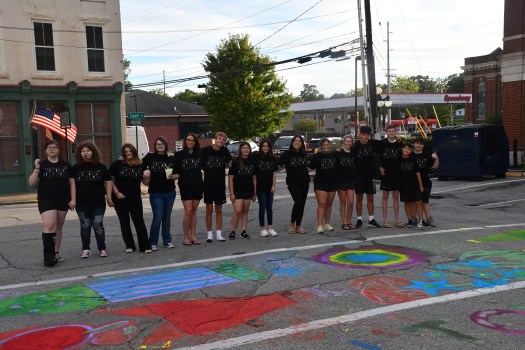 Participants of Rowland Arts Center for Teens painted a crosswalk to raise awareness regarding safety concerns. (Photo by Matt Cizek) 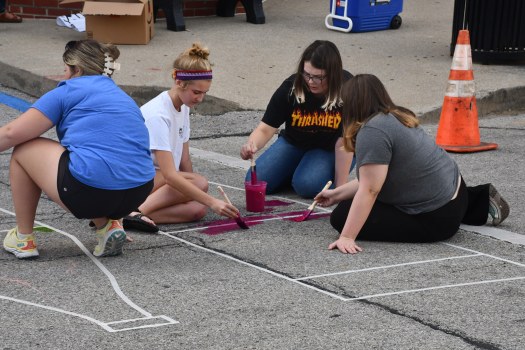 The project was suppossed to be completed earlier in the summer but was postponed several times. (Photo by Matt Cizek) 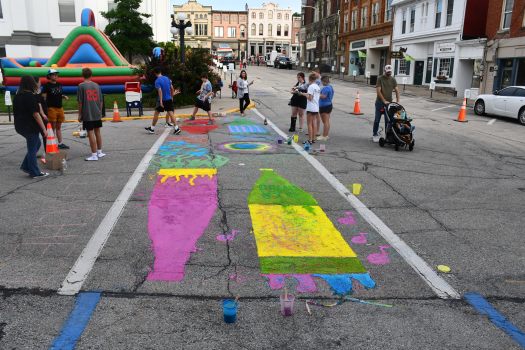 The completed project saw the crosswalk filled up with Ale-8 bottles! (Photo by Matt Cizek)

During the last Rock the Block event Friday night, a large population from town could be found celebrating in front of the Clark County Courthouse, but on the backside of the courthouse, something just as valuable was taking place.

Students from Rowland Arts Center for Teens had designed and painted a crosswalk to look like Ale-8 bottles at the intersection of Court Street and Wall Alley. They did so in collaboration with Main Street Winchester and Winchester Design Studio.

“It’s pretty cool. It has a lot of colors to it”, said Ellie Mitmesser, an intern for RAC and recent GRC graduation who took part in the project. “It’s good to get kids’ ideas because they’re also a part of Winchester, and they have ideas too.”

For one day a week over five weeks before school ended, students and other collaborators met to plan the project, which they hoped to complete earlier in the summer.

After some unanticipated delays, they were able to get the project started and completed on Friday evening – just before the start of the school year.

“We’re really excited about that. They had a lot of experience working with professional designers at the design studio,” said Rebecca Campomanes, a Main St. Winchester board member. “They’re thinking about it, more than just throwing something out in the world.”

The process began with the outlines of four different Ale 8 bottles, made with masking tape to help direct the teens about where to color.

Using a combination of color powder mixed with water to come up with various paint colors, the students painted stars, musical notes, and even the words “Downtown Winchester” with multi-colored letters.

“Ale-8 incorporates Rock the Block, and we thought music notes would be a good touch”, Campomanes added.

If an accident occurred while painting, creativity solved that problem. Such was the case when an unintended streak of yellow paint created a fiery-looking lava lamp.

As much as entertainment played a role in the project, future goals were also in mind.

Although rain will wash away the current paintings, it’s hoped that awareness can lead to other actions – as the project began with students considering things within the community that they thought could use change.

“They looked at safety as a pedestrian through [the] eyes of different people, so maybe someone pushing a pedestrian through a stroller or someone who’s visually or hearing impaired, and then identified elements that would make those people feel safe”, said Cameron Correll, Winchester resident and program coordinator for Winchester Design Studio. “This was kind of the first step in getting the community comfortable with a painted crosswalk. Hopefully, the next iteration of this will be something more permanent.”

For Liz Shemwell, a board member of the arts center, the activity also served multiple ends.

“I think we also have a pretty strong art community in Winchester that doesn’t always get highlighted,” Shemwell said. “To highlight that and also to bring the students into that is pretty cool.”