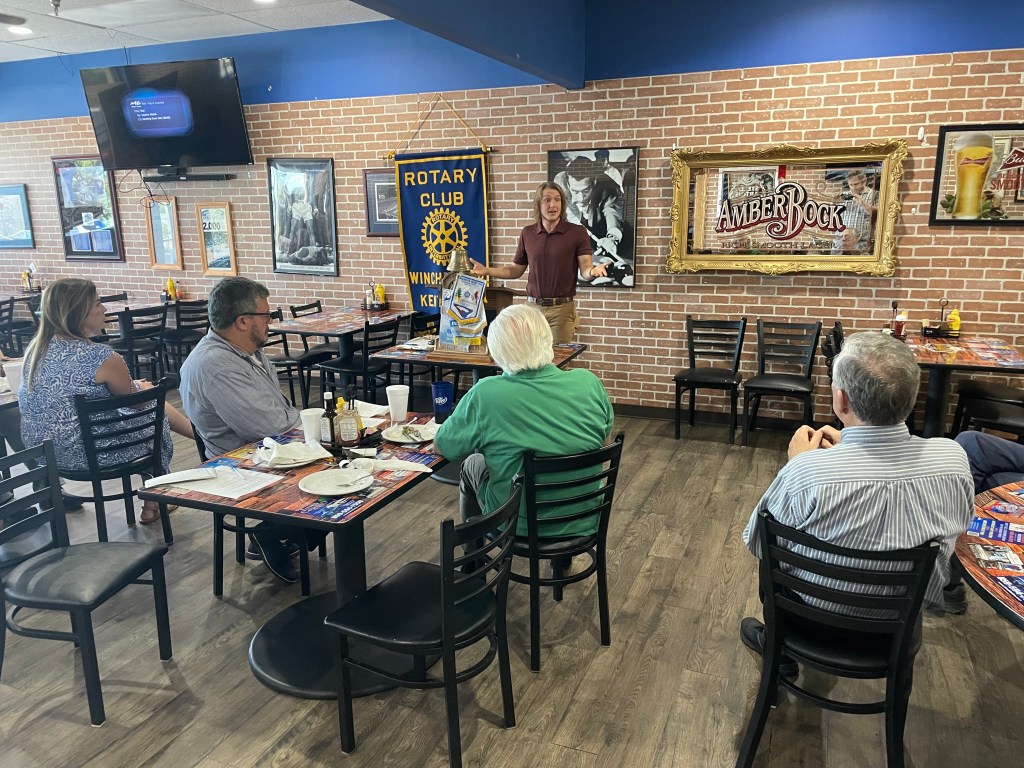 While working at Creative Coffee’s Roastery and running his own wholesale bakery business, The Backcountry Baking Company, it might seem hard to believe that Seth Boyken has time to be in charge of other matters.

However, as president of the Winchester Clark County Farmers’ Market, he does just that.

Last Friday, Boyken was present at the Winchester-Clark County Rotary Club meeting to discuss highlights of the season, which started in May and goes through September 17th.

“The farmers’ market here has had a lot of progress in the last two years,” said Boyken. “We’re very proud of it, and we want to continue to provide growth there to downtown Winchester.”

This year, the farmers’ market began operating along Depot Street under a pavilion near refurbished silos.

During its opening, earlier this summer, between 400 to 500 customers arrived. While this was the high mark of the year population-wise, there was a continuation of large crowds.

“For four weeks after that, it was still roughly around 400”, Boyken said. “We’re proud of that, and we want to continue to maintain it.”

One can find several edible treats at the market.

Vegetables such as potatoes, tomatoes, and different types of hot peppers are currently in-season. Other items such as fresh eggs and cinnamon rolls are showcased, as are fruits, including strawberries.

Boyken’s own business is offering bacon and cheddar scones/

“They’re a pretty popular product of ours,” he says.

While the pavilion has improved the shopping environment, new suggestions are always welcome.

Among the things discussed last Friday were the possibility of having live music played and opening up the farmers market for business on Tuesday nights.

“In the past, it was between 5 and 7 p.m,” Boyken said. “It’s more just getting our vendors on board and having our produce ready.”

The farmers’ market is open on Saturday, though it has stepped in by having a Christmas market and even undertaking a tool donation to support others in eastern Kentucky.

As a Winchester native who has seen the market grow from four to five vendors on its busiest day to its currently available number of thirty-two, the future holds plenty of reason for optimism to Boyken.

“I’ve been part of the market since I was eight, which is why I’m very proud to be in this position now,” he said. “I’ve gotten to see it grow and continue to develop.”