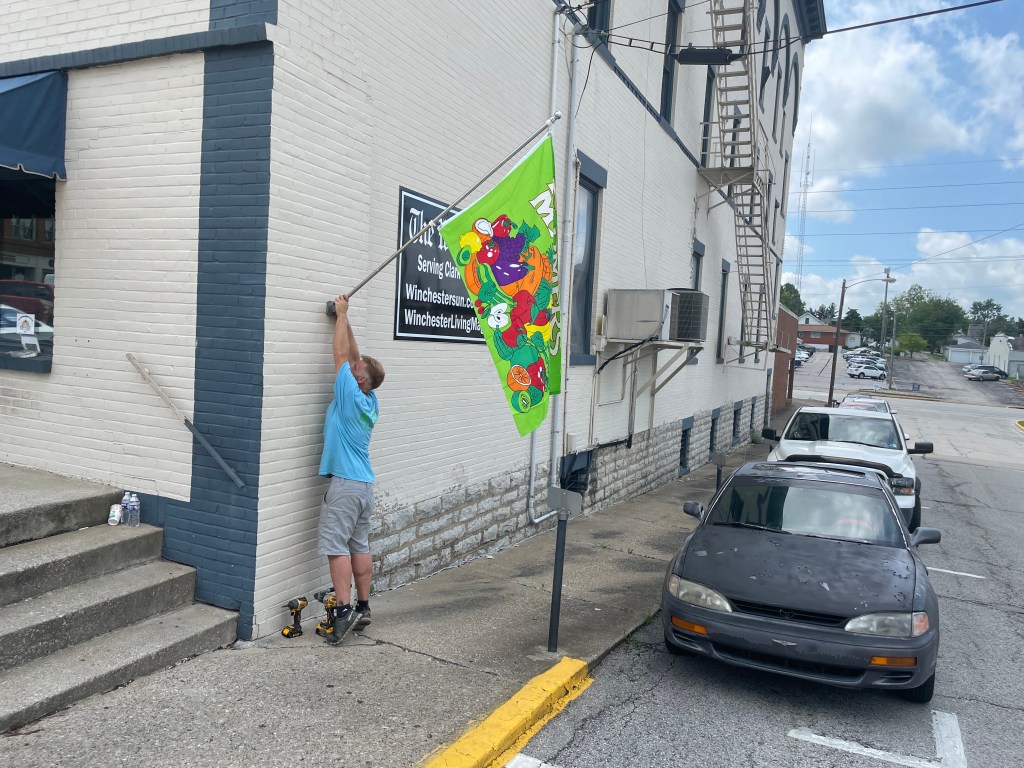 Residents might have recently noticed a common theme among many businesses when looking around downtown.

Thanks to the Flag of the Month series, multitudes of businesses and organizations began waving flags outside their buildings in a showing of celebration and solidarity.

“It seemed like a great idea to get some community spirit downtown,” said Adam Kidd. He owns the McEldowney Building and is a project administrator at Dam Holdings LLC, performing restoration and renovation work. “This is truly businesses working with other businesses to show a united front downtown.”

This project, which has been in discussion for some time, showcases Kidd going from one business to another and – with equipment in hand – making sure a place is available for hanging the flag.

Starting in June, it has showcased the PRIDE Flag, American flag, and featured the farmer’s market flag in August.

“The second week of August is National Farmer’s Market Week, and I thought it best to really show off the farmers’ market with the new improvements they’ve made down on Depot Street,” Kidd said. “It’s a little cartoony, but we’ve got kind of a cornucopia of vegetables and produce, and just the words ‘farmers’ market’. It’s a bright green flag.”

With September being Recovery Awareness Month, a flag will be flown to show support for that cause.

While the number and names of businesses participating were not released, it has been approximated that thirty-two flags have been produced for this month alone.

Over the next twelve months, thirteen different flags will fly at the select downtown locations.

“Flags are important. They’re symbols for things, and if you show a symbol, you’re obviously going to upset someone that may be on the opposing side,” Kidd acknowledged. “As far as where we’ve been so far, the reception has been overwhelmingly positive. .. Everyone [on both sides] has taken notice of downtown, and everyone has come into the table, and that’s exactly what he want.”

For the future, Kidd sees others taking charge as well.

“This isn’t an Adam Kidd and Dam Holdings project. This is a community project, and we all need to be a part of it”, he said. “I hope in the future months we find a new group of people who are just as excited as I am about this.”