Offense explodes in first half as Cards roll past Eagles 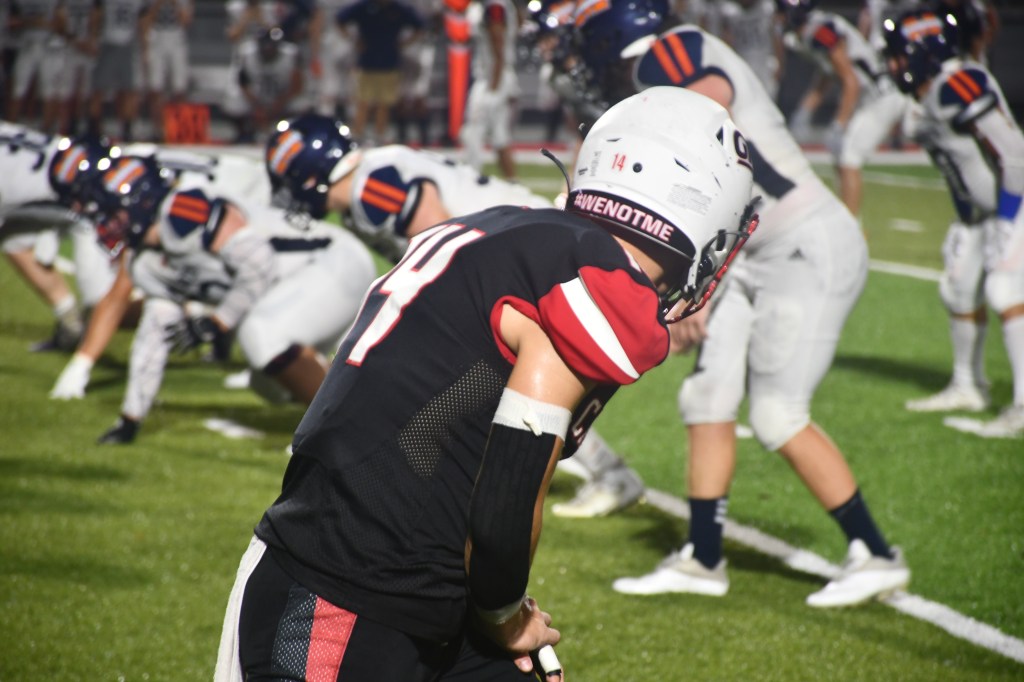 At Cardinal Stadium on Friday, all seemed well on the George Rogers Clark Cardinals’ side.

After a 40-minute lightning delay pushed back the start, GRC (2-0) came out with 43 first-half points en route to a 43-13 victory against the Madison Southern Eagles (0-2) in their home opener.

“I thought our kids came out, they had a mission and plan, and they executed when we called upon them to do so,” said Offensive Coordinator Jordan Ray.

After both teams went three-and-out on their initial possession, the Cardinals received the ball at their 44-yard line.

Another defensive stop and a short punt from the Eagles led to a short drive culminating in QB Tyleik Maxwell’s 1-yard TD run on a QB sneak with 1:28 remaining in the opening period.

Soon after that, the Cards received perhaps their biggest challenge of the night.

Aided partly by two personal four penalties, the Eagles managed to go down the field and scored on a 19-yard TD pass from Ethan Woods to Jayshaun Ethridge with 10:39 remaining in the 2nd quarter.

Yet just when it seemed like momentum was slipping away, Tyleik Maxwell helped get it back in only 32 seconds.

After a strong kickoff return put the Cardinals at the Madison Southern 43-yard line, Maxwell connected with James Michael-Davis for 34 yards to set up a first and goal situation.

On the next play, Maxwell rolled out to his right and scored his second rushing touchdown from 9 yards to give the Cards a definitive 21-7 lead with 10:07 remaining before halftime.

He would connect with Davis (3 receptions for 77 yards; 1 TD) on a 34-yard pass again on their next possession, this time for a touchdown to give the team a 28-7 lead with 6:00 left before halftime.

“Going through the process, it was just [about] keeping the energy up,” said Maxwell. “Our attitude is different…we want to prove something this year.”

Later, Washington would find an open hole and score on a 60-yard TD run, while the final score of the half – and last of the game for the Cardinals – came on a 1-yard run by Zaydin Turner, followed by a 2-pt. conversion run from Maxwell for a 43-7 halftime lead.

While the rush was Turner’s only carry, he led the team in receptions with four catches for 61 yards.

“We’ve been working all week for this,” said Chestnut. “We’re like brothers on this team. We put our trust in all of them. Just run behind our blockers, and hit the open guy.”

After making all four extra-point attempts last week, Clay Turley would be five-for-five in the first half Friday night.

Though the Eagles would score once in the third quarter, the Cards were able to play the second half with a running clock.

Decked out in Americana gear, the student section had plenty to celebrate.

“I’m excited for Coach Chirico, and all the kids in the programs,” he said. “There’s always something that seems to be going on out here, and it just gives me so much pride to be able to share this with the community.”

Next week, the Cards will take on the West Jessamine Colts (1-1), who Chestnut previously played for.

While this offers some intrigue, Coach Ray also knows that the Cards will have to continue staying focused.

“Coach Scott [Marsh] does a good job over there,” Ray said. “They’re hard-nosed. We got to prepare each week. If everyone does their assignment, good things happen.”