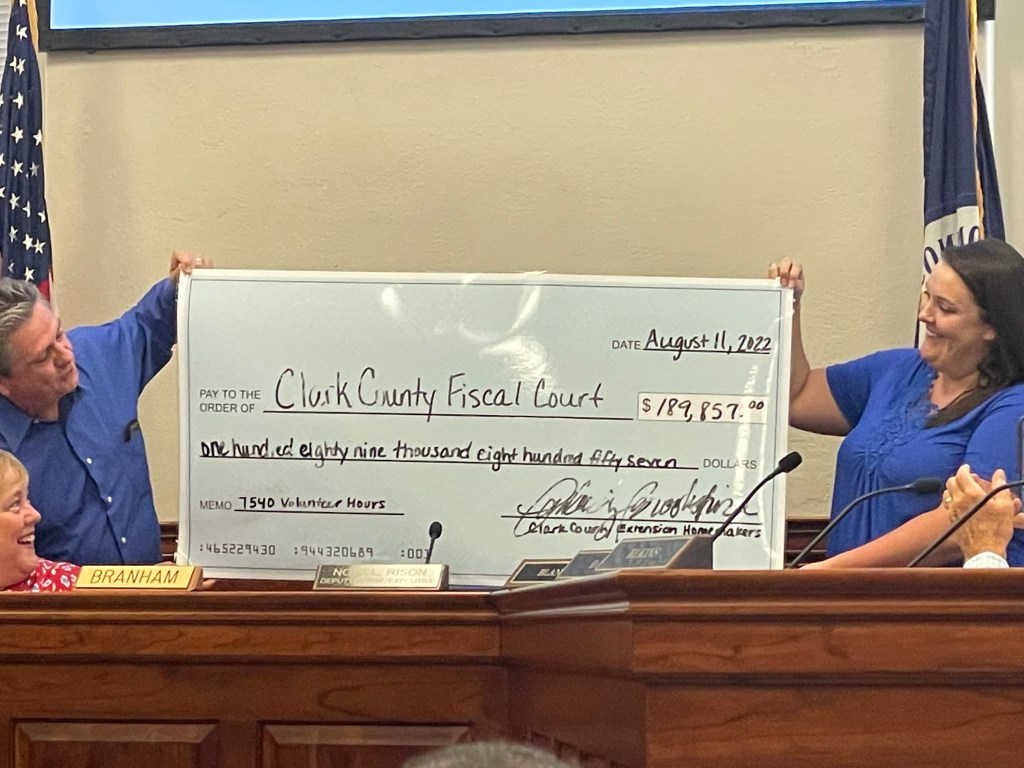 A community splash park that community members have championed just got one step closer to becoming a reality. At the same time, the Clark County Fiscal Court received a symbolic check rewarding volunteer hours during Thursday night’s meeting at the Clark County Courthouse.

In a previous meeting, a resolution was made to set aside $100,000 before revisiting the idea of a community splash park.

“We’d love to thank you for the time to entertain you and to help you give money toward this splash park so it can become a reality to all of our children,” she said. “This project has been going on for so long [that] people lose hope, but I have faith that after 15 years, this will happen.”

During a discussion,  Magistrate Robert Blanton mentioned, “If we can take a splash [park] at this point, we can do that. At some point in the future, we may look at a pool.”

So it is possible that the splash park may not be the only aquatic activity the fiscal court bankrolls.

The motion to budget $100,000 toward the development of a community splash park after was passed with unanimous approval.

A check from local homemakers

A symbolic check in the value of $189, 857.00 was presented to the Clark County Fiscal Court on behalf of Clark County Extension Homemakers.

The amount was given just after the meeting was called to order, and the check will not be deposited.

“It’s for 7,540 volunteer hours”, said Clark County Judge-Executive Henry Branham. “Their volunteer work is for all kinds of things, and I can’t go threw the list, but they do a lot of good things in the community and we sure do appreciate it.”

The Clark County Extension Homemakers has been active in events such as the Beer Cheese Festival and worked in collaboration with organizations, including Lady Veterans Connect. They have also hosted classes in events such as sewing and needle making.

In addition, the Clark County Fire Department celebrated the promotion of Lucas Yaste from firefighter to lieutenant.

Lt. Yates, present with his wife and three children, has been with the Clark County Fire Department since March 2019.

Before firefighting, he’d worked for Toyota and been a Kentucky National Guard member.

Judge Branham swore him in.

“As an officer of the Clark County Fire Department, it is your duty to save lives and protect property in service to the citizens of Clark County,” said Branham.