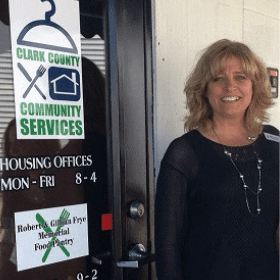 In a long thought-out and emotionally-laden decision, twenty-five-year Winchester resident Debbie Fatkin has resigned as the director of Clark County Community Services.

The decision comes as Fatkin and her husband, Mark, prepare to move to southern Indiana to be nearer to her son’s family and parents. Her first grandchild will be born in the spring of 2023.

“We deliver the bittersweet news that the time has come for Debbie to move on to the next, exciting chapter of her life. This was not an easy decision for Debbie to make and has been one that has involved countless prayers and many tears”, the organization wrote in the statement. “The CCCS Board is incredibly proud to have served alongside Debbie – she will carry our love and support as she and Mark take their next steps as a family.”

Fatkin has served as the director of CCCS for nearly ten years.

Clark County Community Services assist families of Clark County in times of crisis. One way they do this is by providing food, shelter, clothing, and utility assistance.

Asked about what changes have stood out the most, Fatkin acknowledged that community support had a positive, domino-like effect.

“I think one of the biggest ways that it has grown is that more people are aware of us and what we do,” she said. “That, in turn, means additional donations … Which, in turn, makes the store do extremely well. I don’t have to worry about keeping an eye on every single penny when somebody comes in and asks for assistance. I can just bring people to help you.”

Though her resignation is bittersweet, Fatkin herself was met with widespread praise by members of the organization’s board of directors.

“It is difficult to put into words how fortunate our board, our organization, and our community have been to have Debbie serve as the Executive Director of Clark County Community Services these many years,” he said. “It is difficult for me to imagine anyone possessing a more perfect mix of compassion, stubbornness, tact, humor, servant-leadership, candor, good judgment, and faith necessary to carry out the mission of CCCS.”

Fatkin acknowledges that this decision did not come lightly due to her closeness toward the Winchester community.

“This was an easy decision made difficult because I love my job and am passionate about the people of Clark County … Change is always difficult, but God’s timing is perfect”, she said.

However, Fatkin also demonstrates the confidence that CCCS will continue to flourish.

“Please note that the board of CCCS have a plan in place”, she said. “CCCS is not Debbie Fatkin. It is the people of Clark County.”

Effective September 1st, the board of directors will post the position for the executive director. The posting for the position will close on September 23rd.