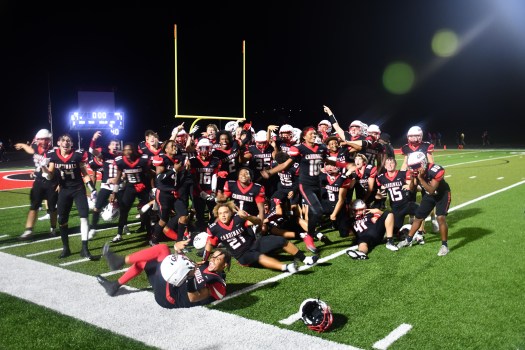 The Cards celebrate defending their home turf with an emphatic rivalry victory over the Montgomery County Indians. (Photo by Matt Cizek) 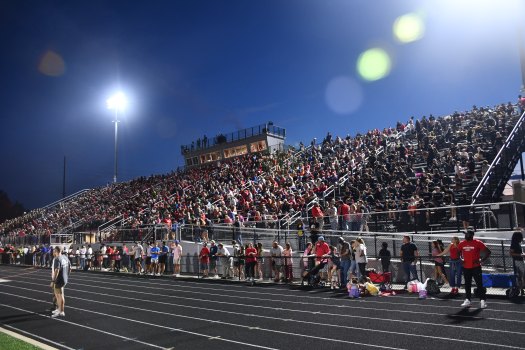 A full crowd brought the noise as the Cards renewed their heated rivalry against Montgomery County. (Photo by Matt Cizek) 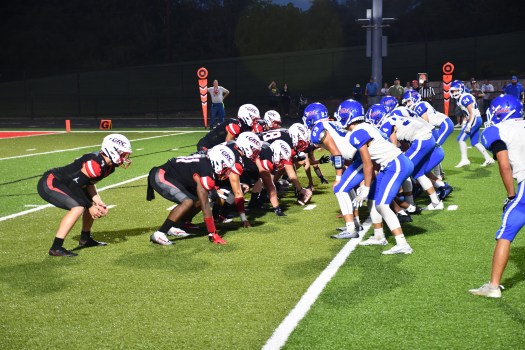 GRC struck first against the rival Indians and had an answer every time Montgomery County looked like it might seize the momentum. (Photo by Matt Cizek) 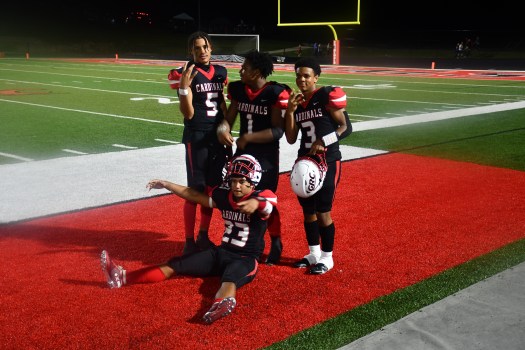 The 4-0 Cards are off to their best start in over a decade. (Photo by Matt Cizek)

At some schools, tradition dictates that cheerleaders must do pushups for every point their team scores, but thankfully for the group at George Rogers Clark High School, that rule did not apply Friday.

The Cardinals (4-0) set a new season-high in points scored for the fourth time in four games, while the defense shut out Montgomery County (0-3) in the second half to capture a dominant 67-17 victory.

“The kids played hard, executed the calls, and did the little things,” coach Joe Chirico said. “I’m super proud of my guys and my staff. They did a great job.”

The game started strongly for GRC, as they took the ball in for a touchdown on their opening possession after Kalen Washington (10 carries for 59 yards; 2 TDs) scored from 10 yards out for an early 7-0 lead with 10:27 remaining.

Bryce Chestnut, who finished with 95 yards rushing on just six carries, helped set up the early score with a 41-yard burst.

After the Cards’ defense tightened in the red zone and forced a Montgomery County field goal, GRC showed grit by converting three third downs before QB Tyleik Maxwell took off on a 29-yard TD run for a 14-3 lead with 7:32 left in the first quarter.

Maxwell had a day to remember.

After announcing that he’d received a scholarship offer to the University of Pikeville and being given a state championship ring at halftime for being a member of the school’s basketball team, Maxwell finished 9-of-15 passing for 105 yards and 2 TDs while rushing 9 times for 115 yards and two additional TDs.

“This morning, when I woke up, I didn’t think it was going to be such a crazy day,” said Maxwell. “Throughout the game, we just kept our energy up, and that’s just what kept us rolling.”

Montgomery County was not one to go down without a fight.

After the score became 21-3, the Indians scored on a 22-yard TD pass from Alex Hatton to Harrison Haddix to make the score 21-10 with 8:38 remaining in the first half.

The Cards scored on an 11-yard TD run from Maxwell, but the Indians narrowed the deficit again following an 81-yard TD pass from Hatton to Jacob Diallo for a 28-17 score with 5:29 remaining.

However, with the Indians determined to kick the ball away from Kalen Washington, Joey Hill received the ensuing kickoff and ran it back approximately 70 yards to set up the Cards’ offense at the Indians’ 16-yard line.

“People take it for granted, but one in every eight plays [on average] is a kick,” Chirico said. “It’s very, very important … You’ve got to be good on special teams.”

Washington would add a 1-yard TD run with 3:57 remaining in the third quarter.

After Jesse McQuade recovered a fumble for the Cards, Zaydin Turner would cap off the Cards’ first-half scoring with a 6-yard TD reception followed by a 2-point conversion catch from Jaylen Berry for a 43-17 halftime advantage.

Berry finished the night with 3 catches for 41 yards, including an 18-yard TD reception in the first half.

“Jaylen blocks his heart off,” Chirico said. “He just blocks hard, and [when] he gets the opportunity to get the ball thrown to him, he always takes advantage of it.”

While the offense undoubtedly made a name for itself, GRC’s defense wasted no time getting into the endzone to start the second half.

James-Michael Davis, who came in late as the quarterback and threw a touchdown pass of his own and stopped a fake Montgomery County field goal attempt along with Ty Miller, intercepted a pass and returned it 32 yards for a touchdown.

“Coach told me to be patient, and that’s what I did. The ball came right to me”, Davis said.

Chestnut and Sam Steele also were able to grab interceptions.

The final scores of the game were a 17-yard TD reception from Zaydin Turner, a 34-yard field goal by Clay Turley, and a 5-yard TD run by Sam Clements.

Turley is now one-for-one on field goal attempts, has converted each extra point attempt, and has kicked several touchbacks.

With two weeks before their next game at Campbell County, there are plenty of reasons for the Cards to have optimism.

At 4-0, the drive to achieve further is evident.

“I believe in us to go even bigger,” Davis said. “[Last] season is in the past. Nobody believed in us, but we’ve got each other.”