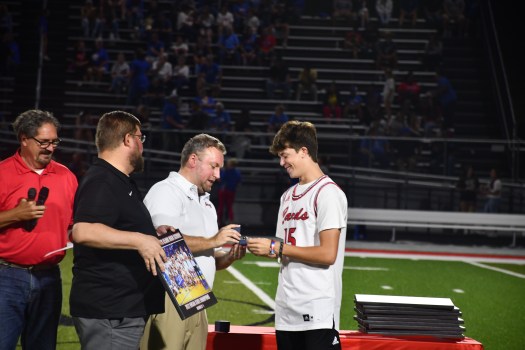 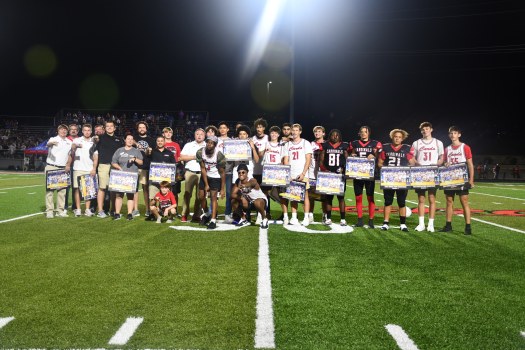 Ring united, and it feels so good.

Though the road was long and, at times, arduous, another step in the celebration took place on Friday night.

At halftime of GRC’s football game against rival Montgomery County, the team came together once more to receive their championship rings.

“Everybody’s out here; a lot of smiles on people’s faces,” said senior Jerone Morton, a Morehead State commit who will return to play for GRC this season. “I’m happy for everybody. My teammates [and] the community. They’ve finally seen us get our rings, and everything’s going good.”

Afterward, staff, coaches, and players entered the field with Queen’s “We Are The Champions” playing over the loudspeakers and roaring applause from the crowd.

Following a statement honoring and recognizing the team’s accomplishments during the 2021-2022 campaign, including a 37-1 record that saw them go undefeated against Kentucky opponents, it was clear the time had come to start giving out the long-awaited jewelry.

Coach Josh Cook, who led the team to victory after its season ended in the state elite eight just one year prior, issued each championship ring.

Next, after honoring both team manager Holden Bishop and Brady Neely – son of the aforementioned Coach Neely – players who took to the hardwood floor were given time to receive their championship rings.

“I miss it a lot. It’s great to see all my past teammates”, said Walton, currently a freshman at the University of the Cumberlands, where he will be playing for the Patriots. “I’ve been really excited ever since coach told us what we were doing. I think they’ve got a chance to do it again.”

Although one notable senior from last year’s team – Aden Slone – could not make it in person, he made his presence known with a personal message on the video scoreboard.

“Thank you for the ride. [I] wish I could be there for the ride with my boys, but it’s always good”, said Slone – currently a freshman at Delta State University in Mississippi – while brandishing his ring.

Though understandably excited, Coach Cook was also focused on the players.

“For me, most of all, I get a chance to see the guys,” he said. “They hadn’t seen the rings, so when they get a chance to…seeing their expression and excitement, that means everything to me.”

While Friday night created a moment to remember, Coach Cook’s thoughts are that the future will only make the memories more valuable.

“I think it’s going to set in even more and more. I think it’ll set in for everybody because [as] people look back, the more they’re going to understand how good that team really was”, he said. “There’s been a lot of great teams and a lot of great tradition. We’re very honored to be a part of that.”