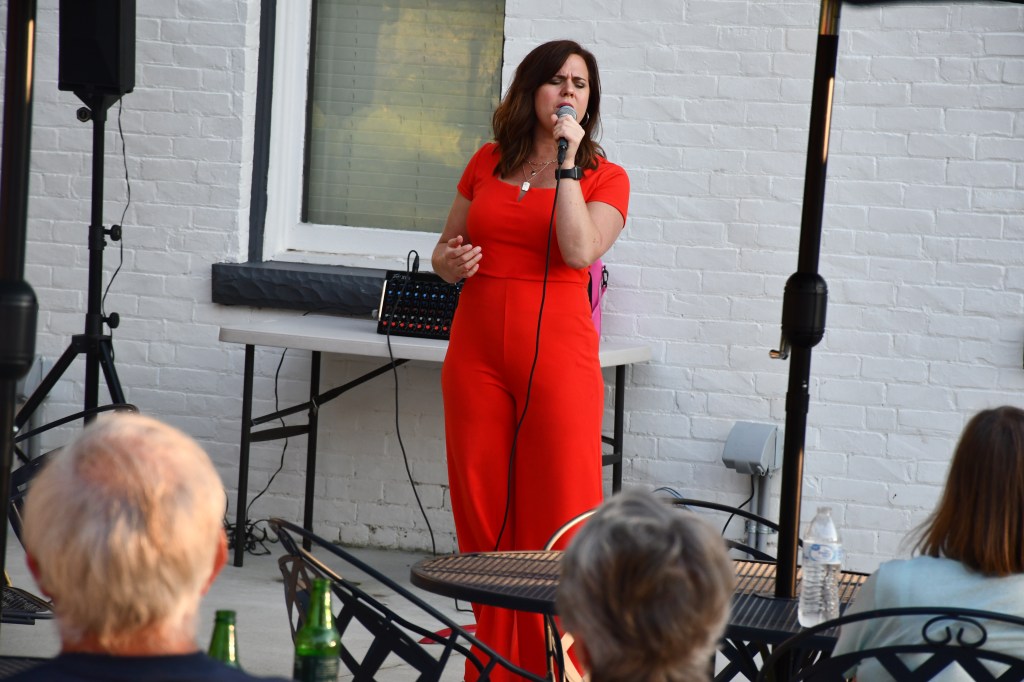 With dozens gathered, it didn’t disappoint as Jessica Begley from Powell County performed a wide range of music.

“I just knew she’d be a great addition to our patio program,” said Sandy Stults, director of Bluegrass Heritage Museum. “Every Thursday, she does a program out in Stanton, so I couldn’t get her until September. The first time I could get her, I got her here.”

Begley has been singing in public since she was five years old. Among several songs, she sang “Stupid Cupid” by Connie Francis, “Jolene” by Dolly Parton, “Me and Bobby McGee” by Janis Joplin, and even “Rocky Top” from the Osborne Brothers, honoring some of her Tennessee connections.

She also performed a duet of the song “Shallow” – made famous by Lady Gaga and Bradley Cooper in the 2018 film version of A Star is Born – with one fortunate, if slightly nervous Winchester resident.

“It was very important to [my mother] that I appreciated all different styles and types of music,” said Begley, a former member of the Appalachian Troubadours and performer at Renfro Valley Entertainment. “I love it all, but I think having [performed] in eastern Kentucky, there’s more of an interest in bluegrass and country. So, I think I’ve probably got more experience doing that just because here it’s what people want to hear.”

Seated outside the patio, guests could enjoy treats that included a variety of drinks, ham sandwiches, taco dip with nachos, watermelon, and cantaloupe, plus desserts such as blueberry cheesecake.

Long-time Winchester resident Harold Barker was one of many individuals in attendance.

“I’ve belonged to the museum ever since it started … I’ve kept up with music just because it’s part of my life”, he said.

While having a background in music, Begley currently works as a library media specialist at Stanton Elementary School.

As such, she sees that the value in history is evident in the lives of individuals – including young people.

“We’ve got to keep our history alive. I think history is so important so that we can make better decisions for the future”, Begley said. “We’ve got September 11 coming up, and I was just talking to my students today. A lot of them were like, ‘We weren’t even alive during then,’ so they didn’t really see why they needed to know about it. Just teaching them the importance of that I think is important for them moving forward.”

For Stults, a former school teacher in her own right, much the same can be said.

“We started Second Thursday because we wanted to bring people in. We wanted to make people aware”, Stults said. “We still have people that say, ’Oh, we have a museum in Winchester,’ and we’ve been here 18 years.”

Starting in late July through the middle of September 2023, a Smithsonian exhibit called Spark Invitation will be coming to town.