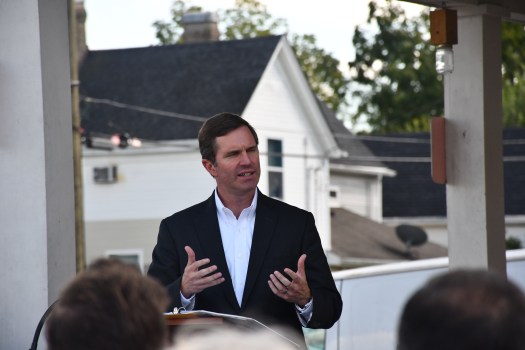 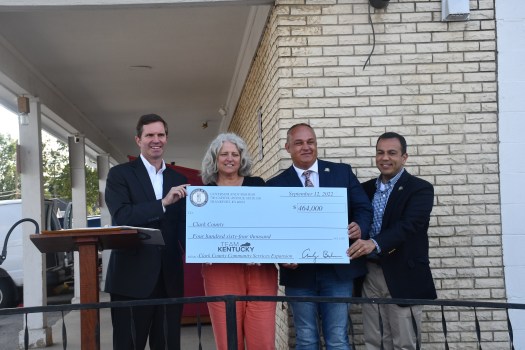 The highest office holder in Kentucky visited Winchester on Monday.

Gov. Andy Beshear visited and spoke to individuals outside of Clark County Community Services on Taylor Avenue and presented a $464,000 check to improve the parking lot and more in a way that will serve its clients.

“I’m pleased today to be here for a good day for Clark County,” said Beshear. “I know this center has helped people through everything from a pandemic to ice storms … Tornadoes in the west, the flooding in the east, inflation that while temporary is tough on our families, even the economic impacts of a war in Europe.”

Both independently and with other organizations, Clark County Community Services has worked to provide various resources to those in need.

Among them, they have been able to provide clothing, housing assistance, and – notably – a food bank dedicated to serving low-income families and others.

They have even gone outside the norm to look after those in unforeseen circumstances, as was the case when “You Can Help” funds to assist a child’s emergency dental needs following an accident were sought.

“[We] can’t do what we do in this building without the support,” said Debbie Fatkin,  the outgoing executive director of Clark County Community Services. “Everything we do is because we live in such a generous community.”

The donation will assist customers directly in several ways regarding the $464,000 provided through a Community Development Block Grant, or CDBG.

“It’s going to make it easier for our seniors to pick up. Currently, they don’t have to get out of their vehicle, but they’re stuck on Taylor [Avenue] and Broadway [Street], which are busy intersections”, said Fatkin. “[We want to] get them into our parking lot, loop around the lot, and then just exit from the lot. We’re excited about that.”

Fatkin will soon become a grandmother and move to southern Indiana to be closer to family.

Such an award, considered the highest title of honor bestowed by the Governor of Kentucky, is given to individuals that have made notable accomplishments and dedicated themselves to outstanding service to the community, state, and nation.

“I was not expecting that at all,” Fatkin said. “It’s a true honor to be in the same [company] of the other Colonels I know about.”

“These funds are going to go well-used,” Alvarado said. “We’ve got two brilliant women here who have helped run this for a long time, but a lot of volunteers here as well.”

Dotson said the funds will be of help to the area.

“It’s not just a beautiful day in the sense of the weather. It’s a beautiful day that we at Clark County have come together as one”, Dotson said. “Being a pastor here for the last 25 years, [I] know the importance of this organization [and] what it means to those in our community.”

Although Clark County Community Services will be changing leadership soon, its legacy as an aid for the community appears to be well intact.

“We can only truly succeed when we lift everybody up, and this organization makes sure the lost, the lonely, and the left behind are found and helped,” Beshear said.