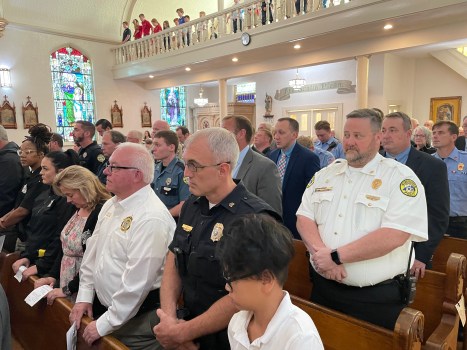 A large contingent of Winchester and Clark County's police, fire, and EMS community turned out for the service. (Photo by Matt Cizek) 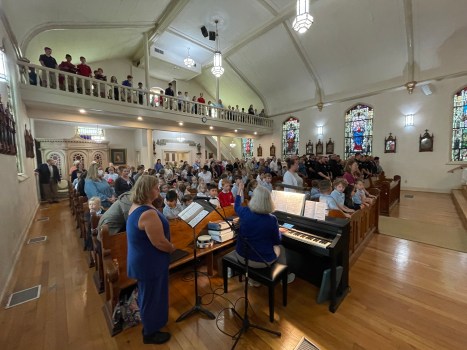 Since 1934, Blue Mass services have been taking place to honor those dedicated to the public service field.

This year, the city of Winchester – as it has done for the last 21 years – performed the service in front of a standing-room-only crowd at St. Joseph Catholic Church, with the balcony filled as well.

The service started following the terrorist attacks of September 11, 2001, which resulted in the deaths of 411 firefighters, police officers, and emergency personnel in New York City alone.

“The Knights of Columbus put out the word to all the local councils to try to do something to honor the first responders and do a Blue Mass,” said Chuck Bast, a member and former Grand Knight of the Knights of Columbus Council 2459, who helped organize the event. “We need to continue to remember and honor the first responders.”

In addition to prayers, various hymn numbers, and readings of the gospel that would be characteristic of many services, the event also showcased a traditional parade of helmets for first responders.

On a table directly to the left of the pulpit, helmets were placed to honor the late Father Mychal Judge.

Judge the was chaplain of the New York City Fire Department at the time of the September 11 attacks and was the first casualty identified after being killed by debris.

Later in the service, Father Nick Pagano would deliver words for the first responders during a homily.

“Every day you put on that uniform, you’re demonstrating the love, the desire to be good for the other person,” he said.

Father Pagano can recall the events of September 11th quite vividly.

A state employee of New York at the time of the events, Pagano was only a few blocks away from the Twin Towers when the tragedy unfolded.

“[I] saw the second plane hit, the first tower go down, the second tower go down, and then the governor issued a notice to all state employees that we were to evacuate unless we were needed,” said Pagano. “I had a Toyota Corolla, and there were seven of us in this car that had to drive from south Manhattan to Rockland County, which was normally a 30-minute trip with no traffic and [a] 45-minute trip with traffic … It was basically 13 hours that day.”

Pagano estimates that 25 to 30 members of his parish died, many firefighters or police officers.

Though the passage of time has taken place, the need to honor and keep in mind the sacrifices of first responders continues to be relevant. The issue goes beyond the memories of September 11 as well.

“The past few years has repeatedly demonstrated the challenges our first responders face from the Covid pandemic, tornadoes, floods, to civil unrests and mass shootings,” Bast said. “They need people to appreciate them because there’s a lot of challenges that they face.”