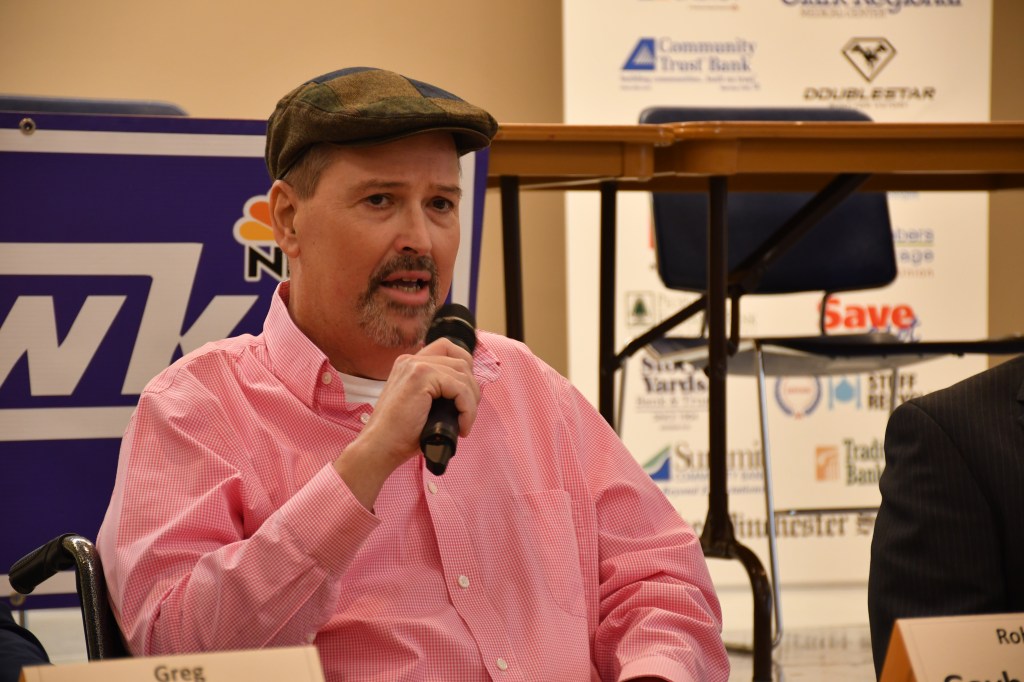 “He did it for the right reasons,” said Pastor David Douglas. “He did it to be a helper. He did it to bring healing to lives that were hurt. That was Robert.”

On Wednesday afternoon, it was the community’s turn to say goodbye.

Gayheart, who died at age 54 on Friday, Sept. 9, after a courageous battle with cancer, was laid to rest following a funeral service at Redeeming Grace Church of God on Lexington Road.

He is survived immediately by his wife Patricia Napier Gayheart, daughters Brylynn Ann Muncy and Sadie Alexa-Rae Gayheart, and several other family members and friends.

Clark County Judge-Executive Henry Branham, who had known Gayheart for over 15 years after meeting in 2006 – the year Gayheart first ran for coroner – spoke of him briefly.

“We immediately formed a good friendship. He was in the Lexington Lions Club, and I was in the Winchester Lions Club”, Branham said. “He’s from eastern Kentucky, but Clark County was his home, and he really cared about the coroner’s office and making it better. He was tireless in seeking out grants and other things.”

Efforts taken by Gayheart professionally resulted in outcomes like the county receiving a Humvee through a federal surplus. The item – he felt – could suit the people of Clark County in the event of dangerous weather or unforeseen circumstances. He also secured at least two coolers for work purposes.

At his service, songs such as “This Little Light of Mine” and “Somebody’s Praying” were played, while individuals who Gayheart had impacted through the community paid a special tribute.

One spoke of how Gayheart’s life positively impacted all present.

Sadie Gayheart, who had created a GoFundMe page and helped support her father in other ways, spoke.

“I know my dad got healing the second he entered Heaven’s Gates,” Gayheart said.

Standing beside her, Chase Hatton – a George Rogers Clark High School senior – offered insight into Gayheart’s role in his life.

“When it comes to Robert, he was a spiritual father to me … [He] always called me son”, Hatton said. “I had accepted the call of God in my life in January, and the first time I preached again, he was actually there.”

It was a fitting tribute for a man who – despite personal struggle – was guided by faith throughout his life.

Pastor Garvin Ricco Floyd, eulogizing Gayheart toward the end of the service, explained.

“If we’re not careful, we’re worried about how we’re going to die … And forget to live how we’re supposed to live”, Floyd said. “Robert lived how God wanted [him] to live.”

Floyd also acknowledged that, though battling cancer after he was first diagnosed in 2019, Gayheart remained faithful.

“You go into some personal conversations that me and Robert had. He wouldn’t worry about passing. He knew [where] he was going”, Floyd said.

Yet, pointing to his family members seated in the front row, it was for love of them that he continued fighting.

“He wanted to make sure you were alright. He knew he was going to be alright”, Floyd said. “When a death angel was at his door, he was making sure … The family was going to be taken care of.”

Gayheart’s impact on Clark County will be immeasurable for those who lived alongside him.

“I was over to visit him a week before last … We talked, and he still had that same confidence, that same personality that I remember back when I first met him many years ago”, Branham said. “We’ll miss that.”