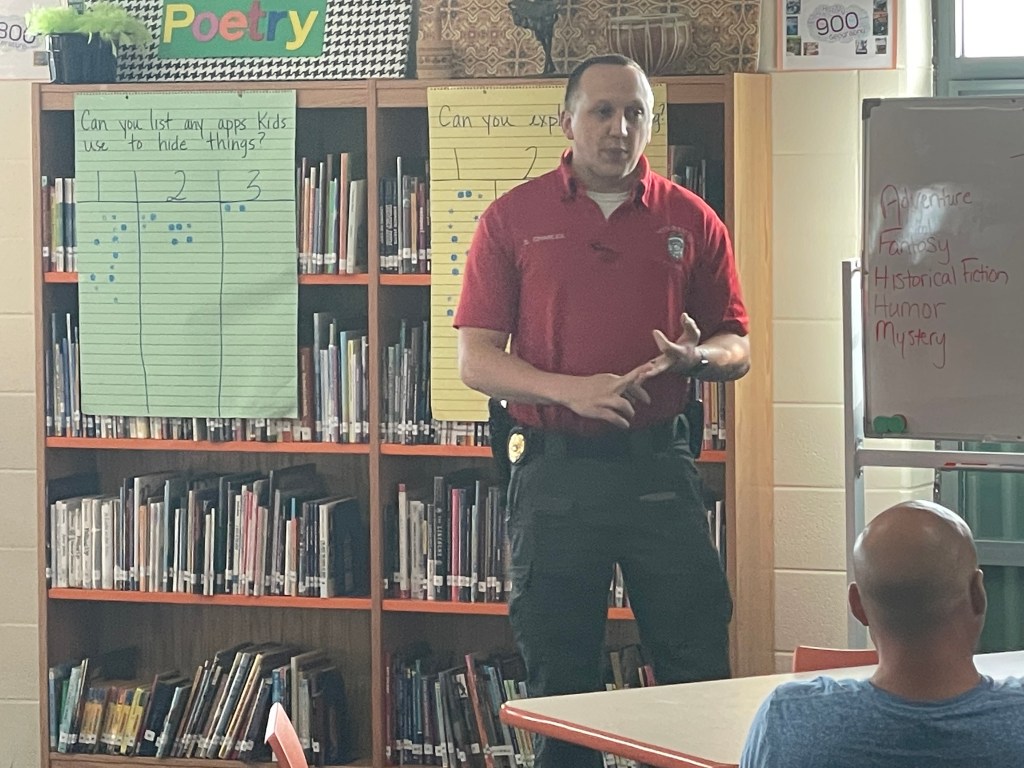 Detective Steve Charles of the Winchester Police Department has been doing investigations for nearly four years and, since that time, has become a go-to source in handling cell phone forensics.

While speaking to kids has become common, Charles talked with a different group last Tuesday night.

Over two dozen adults showed up in the library of Baker Intermediate School for a Cyber Eyes: Internet Safety Class for Parents and Guardians discussion led by Charles, in which he spoke of points to be aware of and actions to keep their kids safe from the risks of technology.

“I think it brings the most information out. Parents want to learn. They want to protect their children”, said Charles. “I’ve seen it have a big impact with people coming to me with things they’ve found on their kids’ phone, secret apps, and things like that.”

The idea for the discussion was the brainchild of Casey Davis, who currently serves as a family resource coordinator at the school.

“I have three boys, so there [were] a lot of things I had questions about,” said Davis. “He had come to our school four years ago to talk to the students. I asked him if he would come to talk with the parents.”

At the meeting, Davis went over different apps – including lesser known ones – and how kids can use them to hide information from parents or others who wish to see them.

According to Charles, parents must take preventative action – even if it sometimes leads to disliking from their child.

“What’s on your children’s phone is the most important thing you really need to know,” Charles said. “Knowing what they’re doing is key. Actually, knowing who their friends are is huge. If somebody is on the other phone, [and] you don’t know them, they’re not a true friend.”

Charles spoke his last remark regarding the risk of encountering online predators.

Along with this threat, Charles spoke about cyberbullying, the risk it entails, and the influence that peer pressure can have on kids.

One example used was Michelle Carter, a Massachusetts teenager convicted of manslaughter after tragically but successfully encouraging her boyfriend to take his own life.

Carter would eventually be released from prison in 2020.

“Kids don’t understand that people out there can hurt them. [They think] their friends are their friends, and everyone has good intentions,” said Charles.

For such reasons, Charles points out that kids sometimes give away sensitive details – such as their phone number, address, and more.

Chief James Hall, also present at the meeting, spoke of how kids sometimes send inappropriate photos via text – commonly called sexting – or other means. It is a message that Chief Hall understands after seventeen years in investigations himself.

“Betting on where they are in the maturity scale, developmental scale, how far they’re developing… You’re going to have a large number that has already sent an image to somebody,” Hall said.
Fortunately, if parents bring their child’s phone to the police station, matters can be dealt with quickly and constructively.

Still, according to Baker Intermediate School Principal Josh Mounts, it is crucial to stay vigilant.

“Raising awareness with parents, grandparents, and other relatives raising children … I think that’s important,” Mounts said. “It’s going to be a never-ending battle because, as [Detective Charles] said, technology’s not going away.”

Detective Charles will return to Baker Intermediate School in October to address the same issues and concerns with students.