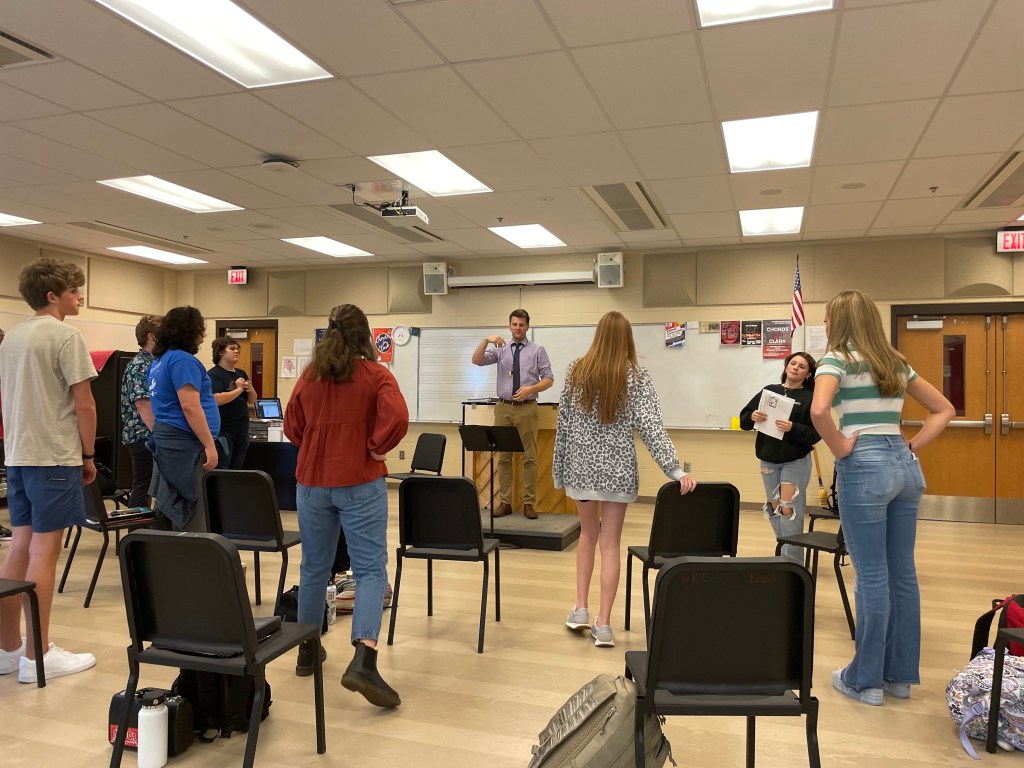 Kris Olson leads his class through vocal exercises. The Cardinal singers performed with The Kentuckians Chorus for the Chords for Clark benefit concert. (Photo by Matt Cizek)

Over the last seven years, growth has been shown and was put on full display on Friday, Sept. 16, when the Cardinal Singers performed live at Leeds Center for the Arts alongside The Kentuckians Chorus – a men’s barbershop quartet – in the Chords for Clark benefit concert.

It was the first time the event took place since 2019.

“It was so much fun. I got to hear so many different varieties of music,” said sophomore Grace Owen, who took home first place at the 2022 Kentucky State Fair Talent Classic earlier this year. “I loved whenever it all came together … We got to see ourselves perform as a group, and it was just an amazing show altogether.”

A variety of music genres could be heard at the concert.

Along with the barbershop quartet, there was pop and broadway music, plus classical music from both the Romantic and Renaissance era.

The girls performed a blues a capella number, while soloists also shined on the stage with musical theater. One number in particular – “Bring Me Little Water Sylvie” – stood out to multiple performers.

“That was really fun. The crowd loved it”, said junior Hannah Platt, who joined the Cardinal Singers recently after moving to Winchester from Detroit. “We really had a fun time being able to experience that and being able to reach the community.”

Having watched the performance as a freshman volunteer three years ago, Navarette – who used some of what he’s learned in Mr. Olson’s course in a college essay – looked forward to the opportunity to perform Friday night.

“I saw them get on stage [two years ago]. They did so well”, Navarette said. “It really made me want to be a part of this group.”

Navarette acknowledged that the barbershop quartet offered much for students to learn. However, he was far from the only one to do so.

“I loved talking to the quartet members,” added Owen, who sang a rendition of the song “When He Sees Me” from the musical “Waitress.” “They gave me pointers and their knowledge and wisdom. It was just cool talking to them.”

Platt notes that it’s all part of a more extraordinary process geared towards making the singers stand out when they perform for others.

“For people who come and see us sing and hear us sing, we don’t know how they’re coming in,” she said. “They can be broken, they can be alone, they can be depressed or feeling sad, and it’s our job to make sure that they leave feeling whole again.”

Navarette adds that, after somewhat moving away from music during middle school, Olson had a huge part in reconnecting him.

“I was genuinely thinking of quitting for a while until I came to GRC and I took up men’s choir,” Navarette said. “[Mr.] Olson re-sparked that little fire in me. I’ve been in all of his choirs ever since … I appreciate him for it because I would not be the same person I am without it.”

Whether performing live in front of the community or a classroom, the camaraderie of the group remains strong.

“The first day I came in, and I met all of them, it just clicked, and I knew this was where I was supposed to be,” Platt said. “I’ve had some experiences with them already. They really are becoming my family.”