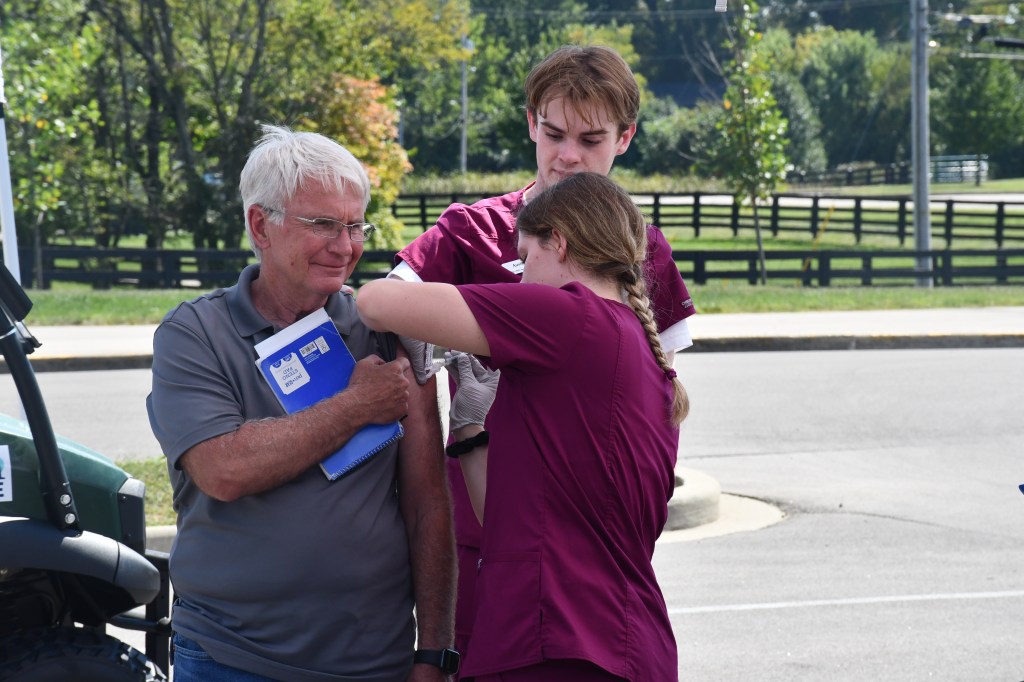 Saying that the importance of vaccines has been mentioned over the last two years would be an understatement.

However, the necessity of flu shots was often forgotten amidst the turmoil caused by the Covid-19 virus.

At Legacy Grove on Tuesday from approximately 12 p.m. until 6:30 p.m., a drive-thru flu shot clinic allowed individuals above nine to be inoculated against the virus.

The Clark County Health Department put on the free event.

“We have [a] high dose flu vaccine and [a] regular dose vaccine. The high doses are for [people] 65 years old and up”, said Jennifer Burchette, a nurse administrator for the health department. “We’re also using this as we need to do a preparedness exercise every year as part of public health.”

Typically, flu shots get received via injection into the deltoid muscle of the upper arm. Following vaccination, antibodies develop in the body approximately two weeks later. These antibodies protect against the illness.

While all are encouraged to receive the vaccine, it is more necessary among specific populations.

Children are a top priority, along with elderly individuals and those that might be immunocompromised.

“They’re often an underrepresented population,” Burchette added. “Children do die every year from the flu. The flu shot doesn’t protect you completely from maybe getting the flu, but it certainly protects against hospitalization and death.”

Early on, it appeared that the day was en route to being a success.

In the first hour, it was open, approximately 40 – 50 people showed up.

As work for those in the community ended later in the evening, it was expected that more would come as well.

For those that did come to receive a vaccine, the uniforms nurses wore were a bit different from ordinary scrubs you might find in a hospital setting.

Nursing students from Eastern Kentucky University were present to provide the injections, a part of school study as they get closer to graduation.

“They are undergrad [bachelor of science in nursing] students, and they’re seniors,” said Nathania Bush, an Instructor for the Eastern Kentucky University School of Nursing. “This is an eight-hour clinical per week [session] for this semester.”

Morgan Rakes was one of the students present to help with the task.

While vaccination has always been taught at schools, it’s become even more relevant as of late.

“People are much more aware of the need to receive their vaccines and try to promote wellness and health education,” Bush said. “They’re doing a lot more teaching about the importance of vaccines and getting that flu shot and those Covid boosters.”

Acknowledging that many big box pharmacies – including CVS – also can administer flu vaccines, Burchette spoke of another overall goal and hope for the day.

“We’re getting back to normal, slowly but surely,” she said. “We’re here to serve [Clark] County, and that’s what we’re doing today.”