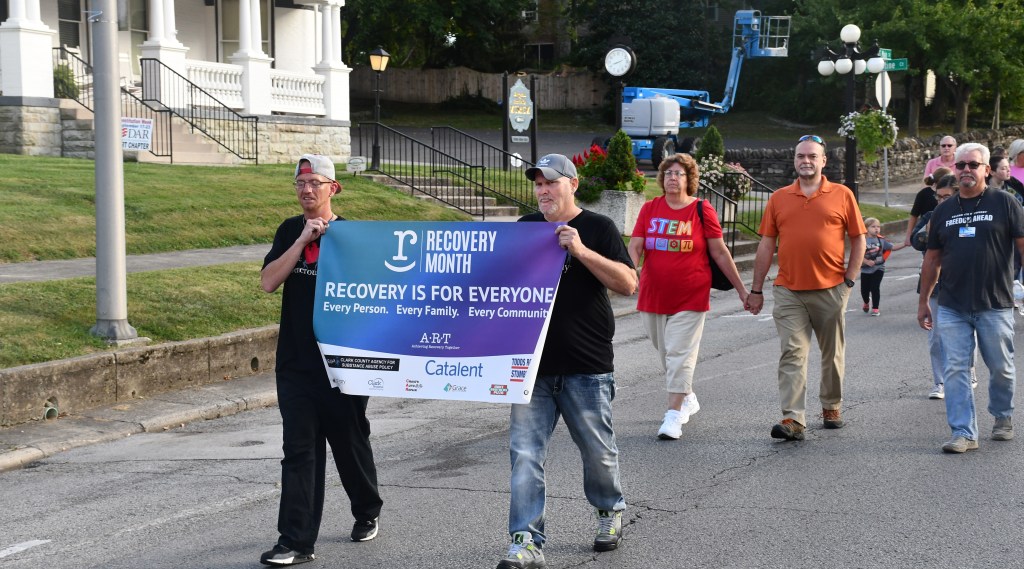 The Rally4Recovery drew dozens of supporters to Winchester on Friday night. (Photo by Matt Cizek)

With the unfortunate fact that thirty Clark County individuals have died in the last year due to drug overdose, it’s a pertinent issue.

On Friday night, Sept. 23, Achieving Recovery Together (ART) presented the 7th Annual Rally 4Recovery to bring together individuals concerned with and affected by substance use disorder.

After Juanita Everman, the executive director and co-founder of Achieving Recovery Together opened the event, Ingram took his turn on the microphone.

Having spent 23 years with the Maysville Police Department, he has seen how drug addiction can affect individuals.

“When I think about drugs like fentanyl that are everywhere and so available and they’re killing so many good people … Something’s got to be done,” he said. “I’m not sure what the answers are at the federal level, but it shouldn’t be this easy to spread this poison across this country.”

Individuals walked up and down Main Street with a banner to show solidarity, turning around at Depot Street and Boon Avenue, respectively.

And, so that kids would have the means to stay entertained, games such as ball toss were/

Individuals – including Everman and Winchester Mayor Ed Burtner – were thrown into a mock jail cell through a jail or bail fundraiser. Money used to “bail” them out would help go toward ART’s mission of guiding others through recovery. On the front lawn of the Clark County Courthouse, remembrance pinwheels were placed to honor those that have fallen.

Mercedies Oakley, who works for the ReVived Recovery in Morehead, was also present.

“Either me or another co-worker that I work with … We just go around and try to support the communities and support recovery,” she said. “I think that you have to have experience with addiction or alcoholism to really understand where people are coming from and where they’re at and how to help.”

Two other speakers with experience in different ways were present.

Annie Sotski from Winchester mentioned losing her youngest brother – born while she was in college – to substance use.

“It broke us all. Those first few days were a nightmare,” she said. “He was a real person with real struggles. Having a sibling die of [a] drug overdose was excruciating. I think watching my mom go through it was even harder.”

Tommy Watkins, whose 21-year struggle with addiction included living by the Washington Street Bridge for over a year, has been sober for the past three years after being helped by ART.

“They loved me when I didn’t love myself,” he acknowledged. “Today, I’m not only sober, but I get the chance to help others find recovery.”

Toward the end of the evening, those who have overcome addiction created and held up posters celebrating their recovery.

Altogether, the event is one of many positive signs of action taken in Clark County.

“I’ve been amazed watching what’s been going on here,” Ingram said. “You all have really taken off … I hope you’ll keep up everything you’re doing in Clark County.”