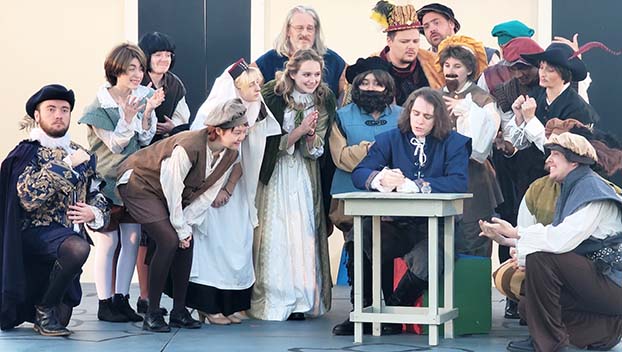 "Shakespeare in Love" will be performed at the ampitheater of BCTC's Winchester campus from Thursday through Saturday. (Photo courtesy of Erin Tuttle)

At Bluegrass Community and Technical College (BCTC), one could expect to find content typically in science, technology, engineering, or mathematics.

However, the fine arts are making a splash.

This weekend, “Shakespeare in Love” will be presented at the Winchester campus amphitheater at 2020 Rolling Hills Lane.

Tickets must be purchased in advance via www.lexingtonky.gov/about-downtown-arts-center or by calling 859-425-2550.

“Our programs allows both students and faculty to audition for shows, but we also open it up to the general public as well,” said Tim Davis, theater coordinator and professor of humanities at BCTC. “We think this is important because as a community college, we want to have these ties to the community, and we think it’s important for our actors to get to act with seasoned performers we have here in [and around] Lexington.”

In 1998, “Shakespeare in Love” entered pop culture as a film. Out of thirteen nominations, it would win seven Academy Awards, including Best Picture.

It’s the story of William Shakespeare, the world’s most well-known and arguably greatest playwright, coming into his own as a writer yet confronting personal and professional challenges.

Along the way, he falls in love with a woman named Viola, who must pose as a man because of laws of the era stating that women could not perform onstage.

As expected, several exciting and amusing hijinks ensue. However, the play also contains a certain amount of sadness, known as pathos.

Several Shakespearean quotes and plays – including “Twelfth Night” and “Romeo and Juliet” – are referenced throughout the production.

Davis, who helped begin the theater program at BCTC in 2006, states that theater, like other live performances, is making a comeback in the aftermath of COVID.

“People didn’t get to have that communal experience of being in a theatrical environment, and they missed it,” he said. “It was a part of their lives that they realized they didn’t miss until that was gone.”

BCTC offers an associate of arts degree in theater, making them one of the few to do so in the Kentucky Community and Technical College System (KCTCS).

They were also one of the early pioneers of doing so in community colleges throughout the southeast.

With four productions yearly, the program includes a variety of genres.

While modern, cutting-edge plays such as those by the playwright Lynn Nottage are included, they also have reached out with holiday plays, classics, musicals, and more.

Examples include “American Idiot,” named after the Green Day song, as well as “The Rocky Horror Picture Show.”

Graduates of the theater program have studied at several four-year universities, with one hired recently as a full-time faculty member at the University of Kentucky.

In time, the award-winning program hopes to have a permanent space.

“The longer the program goes on for us, and the more successful the program is, the more problematic that becomes,” Davis said. “We try to turn it into as much of a positive as we can in that our students get the sense of what it’s like to be in a touring show.”

Whatever challenges may occur, the theater offers many rewards for performers and the audience.

“With live theater, the jokes are funnier, the intense moments are more intense, [and] the sad moments are sadder because it’s real people performing right in front of you,” Davis said.