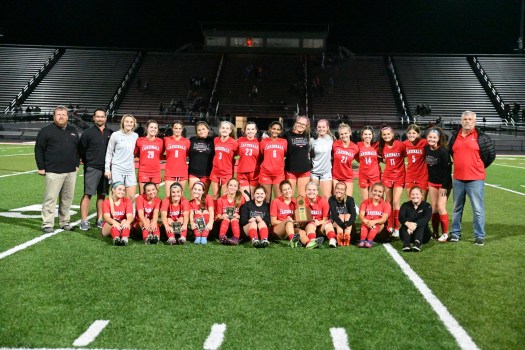 The district title was the Lady Cards seventh in a row. (Photo by GRC Smoke Signals)

The Lady Cards (14-3-2) are the 2022 39th District Champions, winning this year’s tournament with victories against Paris and Montgomery County.

Their first matchup against Paris on Monday evening saw the Lady Cards rout the Greyhounds by a dominating 11-1 score.

Ciana Araya, Jazzy Thirry, and Madelyn Settles scored one goal each as well.

Settles, Patrick, and Stapleton each had an assist, while Araya was the leader in this category with three of her own.

On Tuesday, the team faced stiff competition from Montgomery County yet took home the trophy.

Patrick and Araya each had a goal, while Laney Frazier added an assist.

The team receives a bye in the opening round of the 10th Region Tournament and will play the winner of the matchup between Bishop Brossart and Pendleton County in the semifinals on Wednesday, Oct. 12, at 8:00 p.m. The game will be played at Harrison County High School.

The Cards (10-5-6) came up just short in the 39th District Tournament, yet will continue their season by competing in the 10th Region Tournament.

During their semifinal matchup against Paris, they defeated the Greyhounds in a convincing 4-0 victory.

Goals were scored by P.K. Vogel, Will Carrington, Clay Turley, and Hayden Cockrell.

However, the team would fall 2-0 to Montgomery County in the 39th District Championship Game.

It is the Indians’ 12th consecutive district title.

The Cards advance to the 10th Region Tournament, where they’ll begin play against Mason County in a quarterfinal matchup on Tuesday, Oct. 11, at 8:00 p.m. The winner plays Bishop Brossart in the semifinals. Games will be played at Montgomery County High School.