Sheriff goes back to school as Principal for a Day 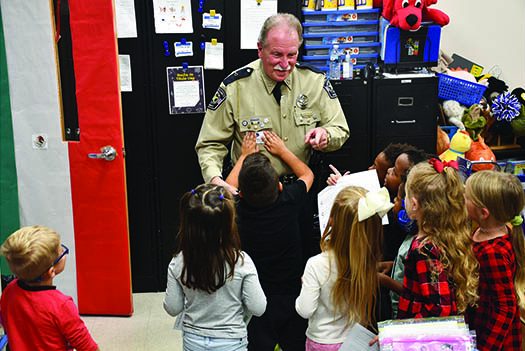 On Tuesday, Clark County Sheriff Berl Perdue was the Principal for a Day at Conkwright Elementary School. (Photo by Matt Cizek)

However, few think of the local county sheriff engaging in daily duties.

Serving as principal for a day, Sheriff Berl Purdue spent much of Tuesday at Conkwright Elementary School conversing with faculty, visiting classrooms, and much more.

“I just enjoy being around kids and interacting with them,” said Perdue, who is in his sixteenth year as Clark County Sheriff. “Everybody’s engaged. All the kids are engaged and having a great time getting their education.”

The plan of having an official from outside the school shadow staff and work with students for the day only came about recently.

In March 2021, the Kentucky General Assembly passed House Concurrent Resolution 25. They declared the third week of September kick-off week for America’s Legislatures Back to School Program to promote civic education. As a result, schools, communities, and individuals have been encouraged to participate in the “Principal for a Day Program” from Sept.-Nov. 18.

When it came to deciding who might be a good candidate, staff from Clark County Public Schools had somebody well in mind.

“[Superintendent] Howard said, ‘I’ve got the perfect candidate for you,’” said Marcum. “He said, ‘I’m going to contact Sheriff Perdue right now.’ I said, ‘That’s alright. Sounds good to me!’”

Though daily duties in his job as sheriff might see Perdue under challenging situations, working with children is something he’s used to doing. He spent thirteen years coaching little league baseball and junior and senior league. He also has experience coaching basketball at the YMCA and football at the middle school level.

On Tuesday, he spent some time seeing how students engaged their peers during recess time and how everything functioned at lunchtime.

Students were quite attentive to the presence of Clark County’s Sheriff in their school.

Many students reached for high fives, extended themselves for a hug, or stopped to ask questions.

“A lot of times they may not have a positive image of law enforcement, and so seeing someone other than our much respected {School Resource] Officer Vaught, it’s not some big, scary policeman that’s here to take care of the bad guys,” Marcum said. “It’s somebody that’s here to check on you and keep you safe. I think that’s probably the biggest piece for me is having Sheriff Perdue here in that role.”

While one may work more with children and the other with adults, Marcum and Perdue’s duties as administrators lend some similarities.

“We’ve talked about the similarities in our roles, evaluating staff and just some of the duties that fall on our shoulders at this level”, Marcum said. “You’ve got to have a lot of smart people working under you.”

Perdue’s being Principal of the Day might be unique, but his connection to the community through schools doesn’t look to be ceasing any time soon.