Commission candidates break down the issues at forum 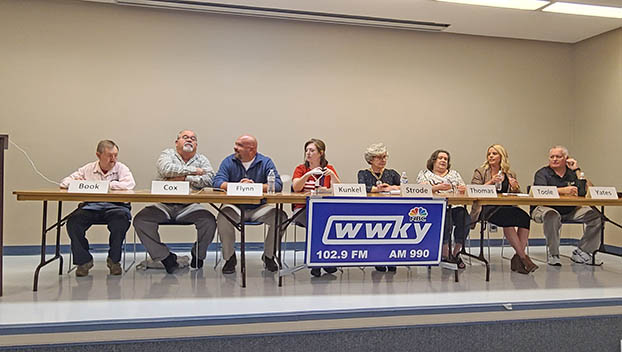 Eight candidates are vying for the four commissioner positions. (Photo by Warren Taylor)

Different candidates were at the Clark County Extension Office last Thursday evening, each vying to become one of four Winchester City Commissioners.

After opening statements, there were several questions.

Candidates got asked why the community was not walkable and had no open public water.

Yates acknowledged that walkability was solid in his neighborhood while not eliminating the possibility that some encountered challenges. Further developing a splash park and a water area around Legacy Grove Park could address additional concerns.

Toole mentioned that the city’s age, narrow roads, and financial concerns may have kept it from implementing sidewalks in all neighborhoods. Saying that she is open to options for a swimming pool, Toole stated it was costly and reminded the audience of the pool at Winchester-Clark County Parks and Recreation.

Thomas said she favored adding handicap accessibility to all neighborhood sidewalks. She noted many advantages of the pool at College Park and favors additional building.

Stroud pointed out that sidewalks were being worked on in and around downtown and that she felt safe. Though the College Park pool was worthwhile, it was expensive, and payments continue being made. The splash pad will be a powerful addition.

Kunkel mentioned that some sidewalks in her neighborhood met a dead-end in potentially dangerous areas, and whether individuals feel comfortable because of issues like poor lighting should be considered. Cost is a consideration with public water, and optimal accessibility is necessary with the splash pad and other developments.

Flynn states that one thing he’d like to see is blinking lights at crosswalks to increase safety. Acknowledging that pools are expensive, he’s glad to see the College Park pool and splash pad coming to fruition.

Cox stated he finds the town pretty walkable, having personally walked approximately three miles daily. Legally, sidewalks are the responsibility of the property owner. During the last year, Cox said city commissioners have communicated with the Parks Department about designing the area by the wastewater treatment plant near a 45-acre pond.

Book stated anyone can walk around, and bicycle trails are accessible too. The former community pool had to be shut down because of a leak, and costs were high. Any pool that could open 24 hours a day, 12 months per year, would be helpful.

A second question asked was how Winchester would benefit from separating EMS from the Fire Department and what the budgetary impact might be.

Opposed to it, Cox said he believes they should stay in the same department, and not doing so would lead to an increase in the budget via more people being hired.

Flynn agreed, adding that as the brother of an EMT/firefighter, he understands the value of individuals trained to do both. He also concurred that it would cause a budget increase.

Kunkel agreed it would cause higher expenses because of personnel and equipment costs. While against it, she mentioned being curious about what individuals in favor of it might think.

Saying that the city commission had not voted on it, Strode mentioned that the fire chief suggested this. She said she believes there must be some merit, one possibility being that recruiting would be easier. She did not acknowledge whether she was for or against it and said it would have a budgetary impact.

Thomas said she believes it would be a great idea, due to staff concentrating on a particular position. It could lead to improved training and should be reviewed closely.

Acknowledging that she wasn’t sure what prompted the fire chief to present this idea, Toole added that being understaffed leads to problems getting equipment and other needs met. This requires more money and budgeting. Toole stated she didn’t yet know enough to offer a solid answer.

Yates said he wished he knew the questions to study the details ahead of time. He said his instinct is to believe it would be ineffective, but he must check the material first.

Book said he is not for the separation because it would negatively affect many with their homeowner’s insurance.

Candidates were asked to name a concrete example of growth that would benefit Winchester.

Flynn said he would like to promote the town to other companies to see more business development and opportunities, which can grow the population and improve schools.

Kunkel stated that affordable housing, as well as long-term jobs and good-paying jobs with benefits, are worth prioritizing.

Strode mentioned that the Winchester-Clark County Industrial Development Authority had a new director (Brad Sowden) who would work hard to recruit. Saying that downtown displayed good signs of growth, Strode added affordable housing and infrastructure on the Eastern Bypass were necessary.

Thomas acknowledged there have been some new businesses brought in for industrial growth.

Yates mentioned housing development, work on the eastern bypass, and dealing with stormwater issues as essential because not doing so would be detrimental to the community

Cox said that adding more houses with people and families is key,