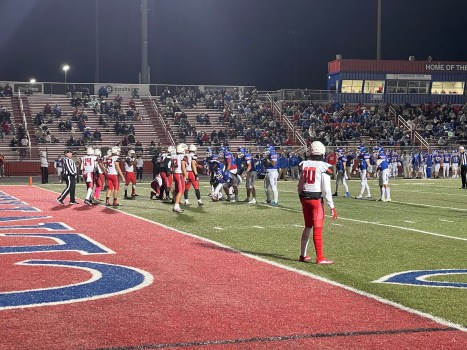 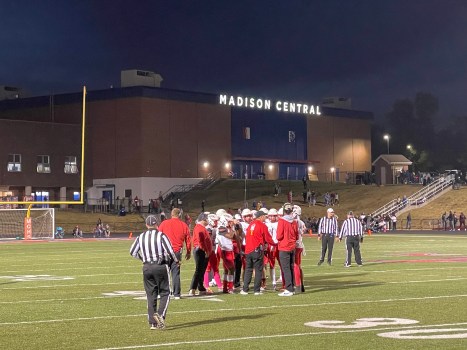 In the second half of Friday’s contest, the George Rogers Clark Cardinals (5-3) outscored 2021 KHSAA Class 6A semifinalist Madison Central (7-1).

Yet a first-half deficit proved to be too much to overcome.

The Cards fell behind to the Indians 21-0 in the first half and ended the night with a 27-14 loss in Richmond.

“I love my team. I love these kids,” said Head Football Coach Joe Chirico. “We battle…We fought back there. I’m proud of them.”

After receiving the opening possession, Madison Central marched down the field and ended the drive with a 16-yard touchdown pass from Hagan Harrison to Jayden West with 4:27 remaining in the opening quarter.

After the Cards could not convert on a fake punt attempt, the Indians received the ball with a short field.

A 3-yard touchdown run by Brady Hensley with 10:46 remaining in the second quarter gave the Indians a 14-0 lead.

While one of the more well-known players on Madison Central is 6’8”, 300-lb, the University of Kentucky commit Malachi Wood, Hensley stood out in the game. He finished with 32 carries for 180 yards, two touchdowns rushing, two receptions for 34 yards, and one touchdown receiving.

“They’re all good. That’s a good football team,” said Chirico. “We try to deal with all of them because not just one of them can beat you.”

Late in the first half, the Cards’ defense was able to force a punt from Madison Central.

However, a quick turnover gave the Indians the ball at the GRC 30-yard line. Promptly, Hensley scored on a 30-yard TD run for a 21-0 lead with 1:57 remaining in the second quarter.

Though the Cards were able to move the ball deep into the Indians’ territory, an interception near the end zone kept them off the scoreboard before halftime.

Coming out of halftime, the Cards were able to find the scoreboard after just three plays.

Kalen Washington rushed down the sideline for a 68-yard touchdown run to narrow the deficit to 21-6 with 10:29 left to be played in the third quarter.

Late in the quarter, the Indians found the end zone for the last time via a 13-yard touchdown pass from Harrison to Hensley.

With 7:28 remaining in the 4th quarter, the Cards drew closer as Bryce Chestnut spun away from a defender and scored on a 7-yard touchdown pass from Tyleik Maxwell. A 2-pt. conversion reception from Jaylen Berry made the score 27-14.

On the next Indians’ offensive position, the Cards were able to put themselves in place to narrow the deficit even further after an interception by linebacker Hayden Heatb put the ball on the Indians’ 4-yard line.

However, a goal-line stand kept the Cards out of the end zone, with the Indians’ taking over at the 1-yard line.

They were then able to run out the clock and preserve the victory.

“In a game like this, inches matter,” Chirico said. “The little things…What you do all week to get to this point, they matter.”

Statistically, the Cards were led on the ground by Washington, who finished with 13 carries for 96 yards and one touchdown. Maxwell finished 3 of 11 passing for 25 yards with one touchdown pass and one interception.

The Cards will continue their season at Cardinal Stadium on Friday. Oct. 21 against Oldham County (0-8). Game time is 7:30 p.m.

This story has been corrected from its original version, which incorrectly stated that the team bus arrived late.