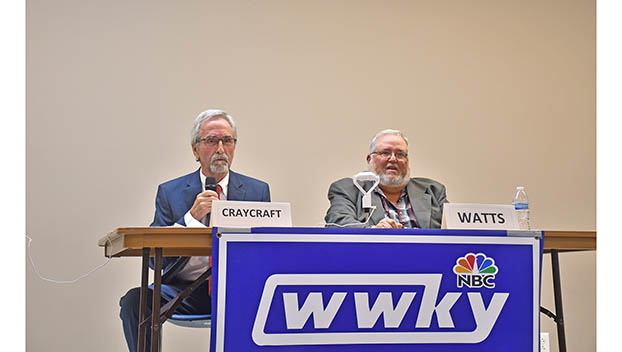 The race for the seat in the 3rd Magisterial District is slightly different this year in a race usually with an incumbent.

Candidates Steve Craycraft (R) and Lee Watts (D) will push toward becoming the new magistrate when the voting takes place on Nov. 8, and both spoke at a candidate forum held at the Clark County Cooperative Extension Office on Oct. 3.

Both introduced themselves during their opening statements.

Craycraft is a third-generation Clark County resident and U.S. Army veteran who has operated Spectrum Photography and Custom Framing for 28 years.

“There are three things I would do if I’m elected: protected, preserve, and promote,” he said. “I support [fiscal] conservatism, low taxes, responsible spending, smart growth, government transparency, and local control of issues.”

Watts, an eighth-generation Clark County resident, seeks to help Clark County further now that he is retired. Two ways of doing so are through starting a sewer project on the bypass and cutting an insurance premium tax.

“I know some people say maybe we can’t do this or shouldn’t do it, it’s not the time to do it. But, it’s always the time to do the right things,” Watts said.

Candidates were asked to give a pro and con for industrial solar.

Watts mentioned that he’s personally against it. If a company shows interest in Clark County regarding solar, there isn’t a place for storing energy. There’s also available farmland.

“Why take up good farmland when we’ve got so many rooftops? If solar is that important, let’s take it and put it on somebody’s rooftop right here in the industrial park,” he said.

Mentioning that he opposed it, Craycraft said it was not a reliable power source. Also, it would be ineffective for the community.

“It would only benefit a handful of large landowners and the foreign developers, but our community would suffer from the economic impact,” he said.

Addressing the question of what his greatest priority is, Craycraft mentioned that the current broadband project is essential.

“It’s something that is badly needed, and with the infrastructure money that we’re getting from [ARPA], I think that’s one of our top priorities,” he said.

While agreeing that the broadband project was practical, Watts also reiterated the desire mentioned in the opening statement.

“I would like to get a sewer on the eastern bypass, and also, I’d like to put some money back into the pockets of hard-working Clark County residents,” he said.

Watts and Craycraft were asked to what extent magistrates get involved with landlord and tenant disputes.

Both agreed this was more of a legal matter, though magistrates might mediate.

Asked about Clark County in four years, both acknowledged that the county looked well off financially.

“With the Republican majority fiscal court in the last four years, all bills are paid [and] there’s money in the bank,” said Craycraft. “[We’ve] paid lower taxes four years in a row, and on top of that, I might add they’ve got two new fire trucks on order.”

Watts’ response drew a laugh from the crowd.

“I do believe there’s such a thing as fiscally conservative Democrats. I’m one of them. Just because Washington D.C. fell off a cliff doesn’t mean I have,” Watts said. “I’m going to do the right thing, and if you have any problems, you can call me [or] you can come to my house. You’re welcome.”