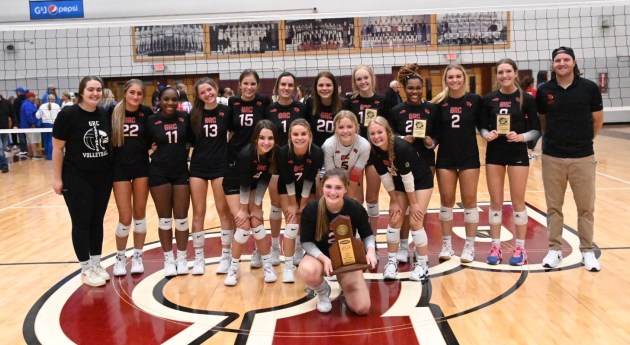 After receiving a first-round bye, the Lady Cards defeated Montgomery County in four sets to win the 40th District Championship at Bourbon County.

“Especially in the preseason when we were just getting going and playing games, we really set the goal that we should compete for the district championship,” said Coach Kainan Hudson, who is in his second year with the program. “That’s what they did, and they accomplished it as a group.”

As with many championships, it was not a straightforward task.

In back-to-back hard-fought sets, the Indians made the Cards work for victory as they came out on top by 25-23, and 25-20 scores.

“It was [a] pretty special moment,” Hudson said. “You could tell the whole game we were definitely playing some of our best that we had played all season long.”

Kelsey McKeehan, who had 37 of the team’s 44 assists, exemplified strong play in the contest.

Also, Ella Lowe and Kamryn Toler finished tied for first with 14 digs each. Zarey Hooten added 12 of her own.

Jordan Thompson, among the top 15 players in the state with blocks, had 7.

“I’ve really seen [Kelsey] stand out this year as a leader. We know her skills on the court are incredible, but the way she’s led the team…Has been pretty awesome to see”, Hudson said. “The way [Thompson] has played middle…she’s done a really good job of being a motivator. She definitely gives it her all…As an eighth grader, it’s pretty special for [Pendley] to be the player she is now.”

After starting the season 13-5, the Lady Cards hit perhaps their toughest stretch of the season in late September.

However, despite tough losses, there was much to be seen.

“Even in the ones we’ve lost…We still never gave up in those close matchups”, Hudson said. “I think [it’s] what prepared us for this kind of moment.”

The fight that the Lady Cards volleyball team showed was on full display in several games, including narrow victories over Campbell County (10-16), Wolfe County (19-11), and twice against Bourbon County (16-16).

For Hudson and the Lady Cards, the season is not yet over.

“The sky [is] the limit for us,” Hudson said. “We just have to continue to keep playing our best ball in each game and continue to stay together as a group. I think [we] have a good chance to beat anyone in the region on any given night. It’s just going to [be] determined on how we come out from start to finish.”

Presently, there are many positives to take away as well.

“I don’t know if I really saw us being as dominant as we were in the district this year, [but] the way they’ve played has really shown growth,” Hudson. “I think that’s what I’m the most proud of.”