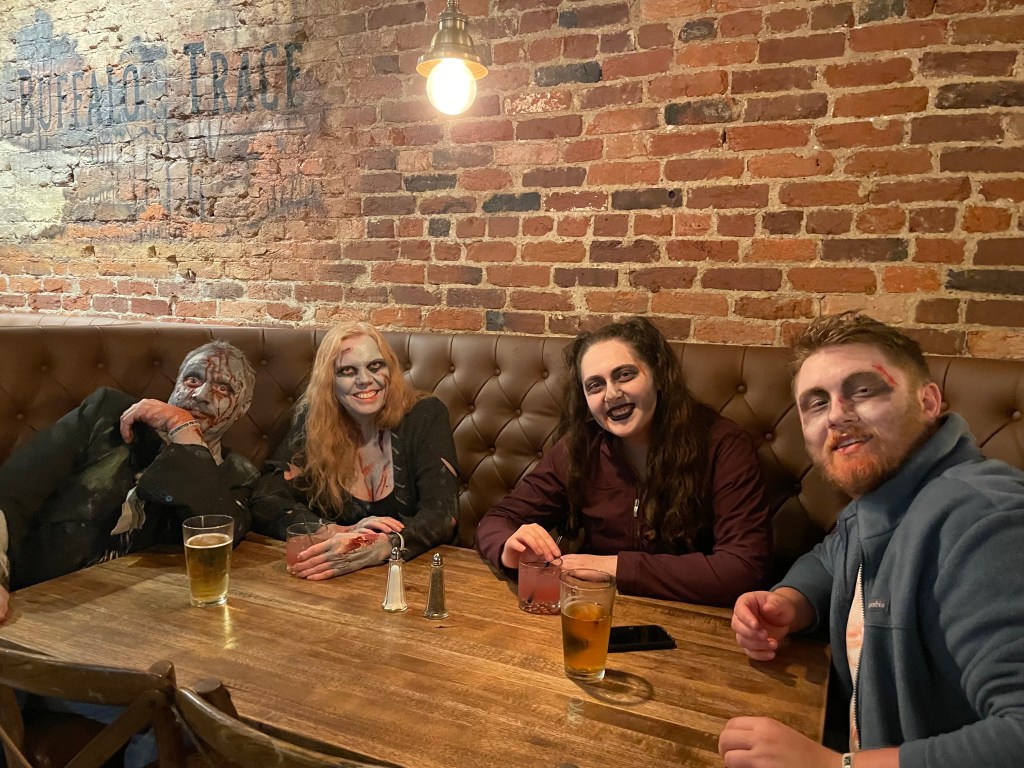 After a successful first iteration, the Zombie Pub Crawl is back for a second year. (Submitted photo)

As many local businesses were looking to bounce back last year following COVID-19, a group of local owners sought ways to provide support.

Before too long, the Zombie Pub Crawl was born.

“The initial intent was just a fun way to get back out and sort of assist restaurants who were still coming off the difficulties with the pandemic,” said Chad Walker, co-owner of the Engine House.

What began as an effort to assist businesses has now become an opportunity for a fun night out.

On Saturday, Oct. 22, seven businesses will partake in the crawl’s second edition.

“We said that Halloween weekend is for kids. The weekend prior is for adults,” Walker said. “That’s why we’re having it on that day…We don’t conflict with the kids and Halloween.”

The event begins at 7:00 p.m. at the Clark County Courthouse and lasts approximately three hours. It will see participants going from one local establishment to the next and sampling various cocktails.

Compared to last year, the route taken will be reversed, with the nightly adventure that travels about a half-mile distance starting at Loma’s and most likely ending at Engine House.

Tickets for the events are $15, and entrants will receive various goods when they arrive.

“Last year, we just did t-shirts. This year, we’re going to do [a] t-shirt, a wristband, [and] a special Zombie Pub Crawl sticker,” Walker said. “They’ll also get an adult goodie bag [with] chocolates and things like that.”

As individuals travel from one of several locations – Loma’s at the Opera House, Wildcat Willy’s, La Trattoria, The Engine House, Abettor Brewing, Micki’s Irish Bar, and the newly opened The Hall Coffee and Social Club – where they’ll be entertained by live music.

Like last year, they will carry around a sizable Bluetooth speaker with themed music playing. Among songs that others might hear are “Werewolves of London,” a classic 1970s rock song by Warren Zevon.

To keep in line with the holiday spirit, those attending will want to dress accordingly in material considered zombie-like.

Rewards include handmade trophies for those chosen to have the best costume, zombie walk, and more.

At the end of the evening, voters will choose who has the best cocktail.

Last year, Micki’s Irish Bar came out as the victor.

“They’ll have some stiff competition,” said Walker, in jest. “I’m sure they’ll try to repeat.”

At the night’s end, there will be fun beyond enjoying what the town offers through both regular and concocted drinks.

“Usually… We’ll have some snacks and pizzas, and we’ll do some chocolates”, Walker said. “We’re going to get some people to donate some gift cards and things like that as well.”

While this year’s Zombie Pub Crawl features some elements, both new and recurring, the future is already under consideration.

“I think what we talked about next year is we’ll probably change the theme and do…Either an ‘All Hallows’ event or just switch it to ‘Wizards and Warlocks’ or something like that”, Walker said. “We’ll try to live up to the Chicago standard. We’ll try to make it right.”