From Denmark to Winchester 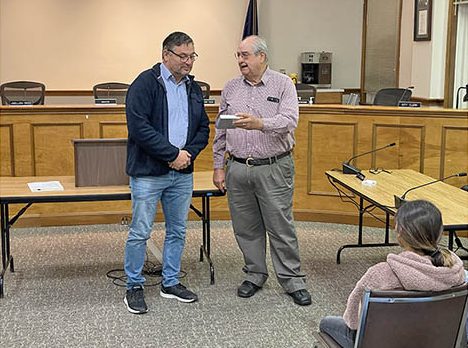 Forty years ago, Causten Moellegaard came to Winchester from Denmark for one year and graduated from George Rogers Clark High School.

On Friday, he was back in town.

As the alums from the Class of 1982 look to celebrate their 40th high school reunion, Moellegaard made the nine-hour flight from Denmark to be there in person.

He also celebrated his return by receiving a photo with Mayor Ed Burtner on Friday morning at Winchester City Hall.

“I really feel [Winchester] is like my second home,” said Moellegaard. “As soon as I came here…it was just like being home again, especially [because of] the people.”

The journey that brought Moellegaard to the United States in the early 1980s started with Youth for Understanding, an international educational exchange organization that works with over 50 independent national organizations worldwide.

Charlotte Neyland, who served as Moellegaard’s host mother, applied and was approved after being interviewed.

“It’s a big responsibility for one year,” said Neyland. “Causten really warmed his way into our hearts…he was a dream come true.”

Along with a strong multicultural background, he came with an interest in sports – something that served him well as he served George Rogers Clark High School as a kicker on their football team.

It was a memorable experience.

“The support we got from the whole city…everybody joined together”, said Moellegaard. “I was really impressed about that.”

He also acknowledged the support from his host family was significant.

In the years after graduating high school and returning to Denmark, Moellegaard joined the military. He later would be accepted to the police zcademy, and has since served as a well-respected officer, detective, and – at present – commissioner.

Upon his return to Winchester, he received a tour of modern-day George Rogers Clark High School.

Forty years ago, the current Robert D. Campbell Junior High School served as the location when he attended.

Not only was he provided with a Christmas ornament that depicted much of Main Street, but he also received a replica of a World War II knife.

For Neyland, who has also taken on additional foreign exchange students, having Moellegaard back in town for a bit offers special meaning.

“He’s been part of our family for forty years,” she said. “It doesn’t matter that he’s gone back to Denmark. He’s been back a couple of times…it’s just like he’s come home.”

With a home-like feeling, Moellegaard doesn’t expect this being the last time he will find himself in Winchester.

“I will come back,” he said. “It’s not the last time I’m in Winchester. I can assure that.”