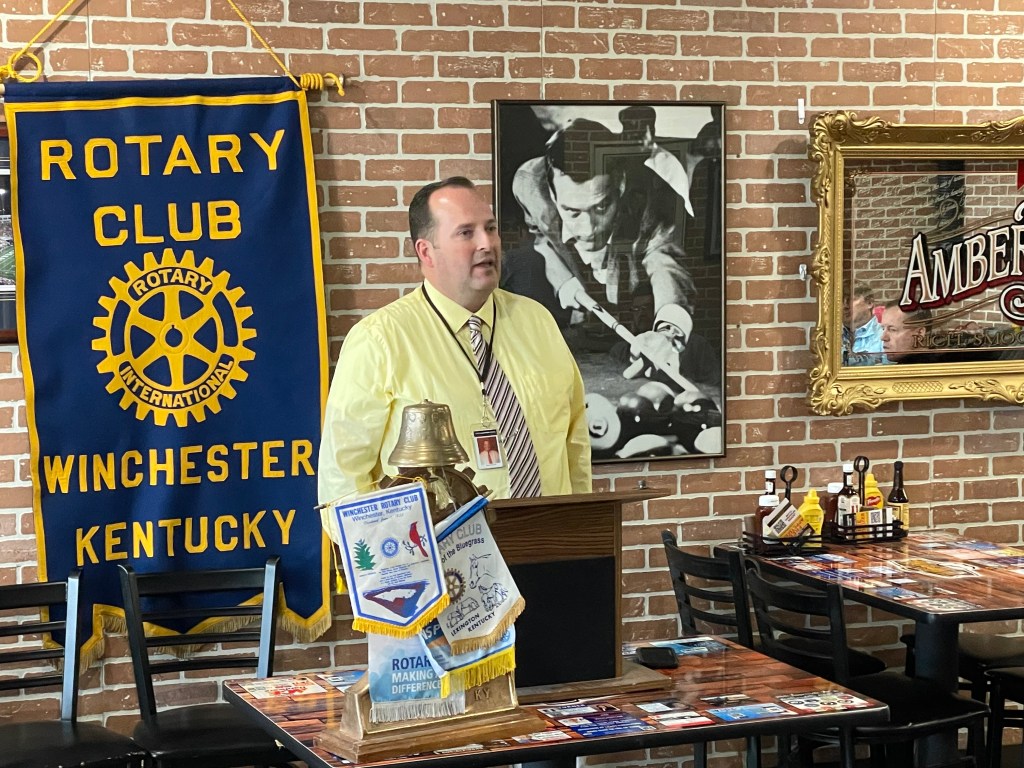 After many years as a science educator, Jason Kincaid didn’t initially see himself as a principal.

Yet midway through Fall, that’s precisely where he finds himself in his first year as principal of Robert D. Campbell Junior High School.

At a recent Winchester-Clark County Rotary Club meeting, Kincaid spoke about his views on education and where he sees the school going next.

“If we want to really change Winchester to be the town and county that we think it can be, it’s [going] to have to come through education,” Kincaid said. “We’ve got to be intentional in what we do. I’m excited [about] where the district is now.”

For Kincaid, the road to administration was an interesting one.

Initially thinking he would go to school to become a doctor, the Alice Lloyd College graduate who grew up in eastern Kentucky discovered education was a preferred pathway.

After graduating and marrying in 2001, Kincaid started his career teaching in a way that some individuals might find inauspicious.

Moving to Cleveland, Kincaid started teaching in one of the worst school districts in the state – one that was nearly $1 billion in debt.

However, despite appearances, Kincaid states that his experience helped make him a success and left him saddened to leave.

“What I learned in Cleveland [was] realizing sometimes education is much more than math and science and English,” Kincaid said. “It’s being a good person. To this day, I know I’m in the position I’m at right now because of what I learned in four years in Cleveland working with those kids.”

Kincaid eventually left Cleveland for Louisville before finding his way to Winchester.

Yet after 17 years in the classroom, a new calling to work in special education struck.

He would eventually become a behavioral coach for four years before transitioning to the role of assistant principal at Robert D. Campbell Junior High School for two years before his current appointment.

One aspect that Kincaid is particularly interested in developing for Winchester is a ten-year plan, which sometimes gets overlooked by districts expecting turnover or other changes.

“We went to a training at [Meade County] School District. They had a ten-year plan. I thought that was amazing for a school system”, Kincaid said. “When I started thinking about that, I thought, ‘Ten years from now, my daughter is going to be done with education…As a district, we’ve got to do something.”

As a result, connecting the elementary, middle, and high schools for a seamless transition from one grade to the next is essential.

“For years, Clark County’s done great things in different schools,” Kincaid said. “The goal now…[is] we’re one Clark County. Everything starts at the preschool and feeds up to one high school.”

Presently, dealing with the aftermath of the pandemic continues to be a concern and priority for staff.

All but a small number of students have returned from distance learning.

“Right before COVID, we were getting ready to take off. We were working with the high school, [and] it was going to be seamless from the time you entered seventh grade from the time you went through high school”, he said. “Everybody thinks if COVID’s over, the kids should be right back to normal and learning. It’s not going to happen…. we’ve got a lot to catch up on.”

As plans to develop a ten-year plan, help students achieve a level of normalcy, and transition from one grade level and school to another with ease goes forth, Kincaid continues emphasizing that the value in education is not always content-related.

“I tell kids all the time…Becoming a good individual, becoming a well-rounded individual that can handle a lot of stuff is the most important thing we can teach you as seventh and eighth graders”, he said.