Trunk or treating and a good cause 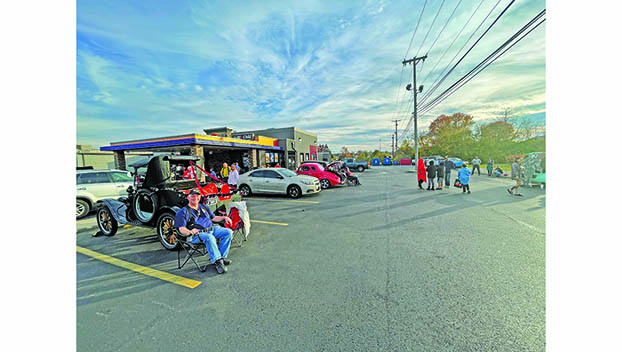 As Trunk or Treat took place Monday night, money was also being raised to support a young boy critically injured in a house fire. (Photo by Matt Cizek)

Monday night, the parking lot was expectedly full at the Dairy Queen on Fulton Road.

However, some people’s interest was giving out candy rather than purchasing a sweet treat.

Trunk or Treat – Cruis’n for Aiden took place, bringing together different classic car enthusiasts who freely gave out candy so that kids could experience Halloween.

“We’re just handing out candy, [providing] a safe place for [kids] to trick-or-treat,” said Richard Rogers, who helped host the event. “We didn’t anticipate a lot of show, [but] it surprised us. We’re proud of it, seeing everyone support.”

As the Halloween holiday is upon us, many parents had children dressed up and take home various treats.

Many costumes were worn.

These included Cinderella, Ironman, Freddy Krueger, Captain America, a dinosaur, and much more.

Cars on the lot went back nearly 100 years.

While Paul Cizek of Lexington brought his 1923 Ford Model T and handed out snickers and M&M’s, Winchester natives Kenny Fenney and his wife Tina were present with a pair of classic Chevrolet vehicles – a 1934 2-door sedan and 1938 Coupe.

The latter was gifted to Tina Fenney after she won in a draw among other family members.

The pair are veterans of car shows, having gone to other locations such as Indiana or Ohio.

“We [were] asked to come out and do the Trunk or Treat for the kids. We kind’ve do this all the time, every year”, said Kenny Fenney. “[Hopefully] they get the candy that they want, and everybody just has a good time.”

A Pontiac Trans Am and a 1967 Chevrolet Camaro were additional vehicles at the event.

Stella Chaney, whose boyfriend’s father brought along the Camaro, also had her young son trick-or-treating while dressed like a fox.

“It’s pretty awesome seeing all the different cars dressed up in Halloween decorations and then seeing the kids,” she said.

Decorations on vehicles included a cardboard cutout of the character Pennywise from Stephen King’s “It.”

None of all that’s been mentioned would be possible without the charitable efforts offered.

At Dairy Queen, 10% of the day’s proceeds went toward Aiden Hensley’s family.

Aiden – who has autism and Fragile X syndrome – received numerous external burns on his body and multiple inhalation burns.

He also suffered an anoxic brain injury because of carbon monoxide poisoning. He spent nearly three months at the UK Children’s Hospital recovering.

Along with several other local firefighters, Lt. Jonathan Beam of the Winchester Fire Department was present.

“It was actually my shift that was on that fire when it happened, and [we’re] just out here trying to support the family and trying to help the kid out,” he said. “All the guys worked hard that day [to] do what they can.”

Previous support efforts have included an event at the Winchester Plaza.

Tyler Hensley, the father of Aiden, appreciates the efforts thus far, though he acknowledges that much is still left to be done.

“[He’s] been going through a slow process of rehabilitation and recovery,” said Hensley. “We talked about doing [a silent auction] up towards Stanton or something, but am not real sure about the details. [We want to] give thanks to all the people that have been helping us out. We really appreciate that.”