Alvarado and Branham become principals for the day 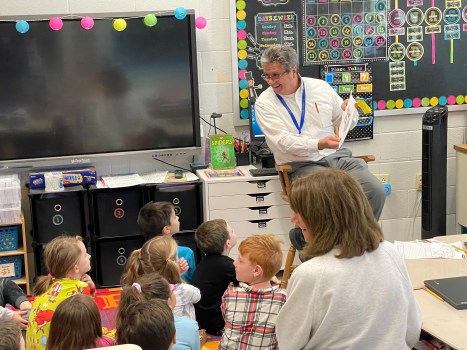 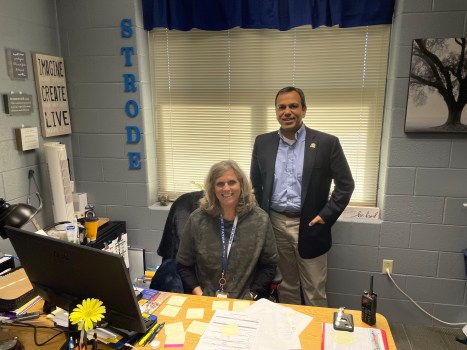 Recently, Sheriff Berl Perdue served as Principal for a Day at Conkwright Elementary School as a part of America’s Legislatures Back to School Program.

On Thursday, the tradition in Winchester continued at two additional locations.

“It’s just good to open up our eyes as legislators to get an idea of what the workings of our schools are,” said Alvarado. “It also keeps you grounded as to the needs locally, so when you go to Frankfort, you fight for things for your community.”

For Branham, the opportunity was a good reminder of public education’s importance.

“One of the things that Mayor Burtner and I have talked about ever since we took office is how important public education is in our community,” said Branham. “We don’t minimize our jobs and what we do as far as city and county government, but with our education system, we have an opportunity to improve not only our community but our entire country and world.”

Both Alvarado and Branham were involved in various ways.

This included double-checking after they had loaded students onto buses to be sure all tasks got completed.

He would later read a book to students and observe a classroom to see how students were guided in SEL or social-emotional learning – a shining topic in elementary education.

“I have not changed anything, and what we’re doing today is just an absolutely normal day,” said Sharrock. “If you’ve learned anything in [administration], the lower you keep everything as far as keeping everything the same, [the better]. We want our expectations for learning to be the utmost.”

While making announcements over the intercom and reading a book to students titled “Pig the Monster” by Aaron Blaney, Branham would answer various questions from students in classrooms that included Wendy Summers’ 2nd-grade group.

Questions ranged from “What’s your job?” and “What do you do for a living besides work?” to “Do you brush your teeth?”

“We were excited to have Mr. Branham come and have insight into what goes on day-to-day here,” said Lindsay Campbell, Assistant Principal at Shearer Elementary School. “It’s just really good for the kids to see a leader in the community that cares and really wants to be with them in the building. [For] our staff, it’s good to see our community supporting us and behind them.”

For Alvarado, who has previously participated in the Principal for a Day Program at George Rogers Clark High School, his experience as a physician offered some relatability.

For Branham, who grew up in the neighborhood around Shearer Elementary School and has seen family both work and attend the school, the occasion also served as an opportunity to connect.

“Shearer has a special place in my heart,” he said. “Usually, if there’s volunteer work to be done… you’ll probably find me somewhere close.”