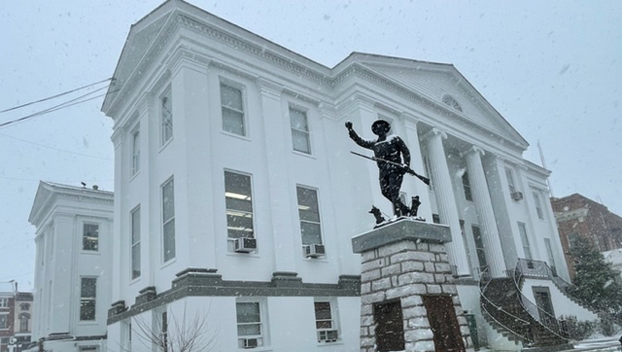 She first thanked the Fiscal Court for approving a resolution for racial harmony in July.

“As far as we’ve been able to learn, we are the first community in Kentucky to adopt such a resolution,” she said.

Also, Morton noted the committee plans to have a copy of the resolution inscribed on a bronze plaque.

The committee requested that the plaque be placed at the front of the courthouse.

“It will be near the Revolutionary War patriots, especially John Sidebottom…who fought the Battle of [Trenton] alongside George Washington,” she said. “[He] helped carry the wounded soldier who turned out to be the President of the United States. His name was James Monroe.”

The plaque and installation will be at no cost to Clark County, with the Winchester Black History and Heritage Committee tending to all expenses.

“We just want you to know that we want it there, and we have been blessed enough to do all of the expenses,” Morton added.

After a discussion that included inquiring about the plaque’s cost, a motion was made by Magistrate Greg Elkins and seconded by Magistrate Dan Konstantopoulos.

Also, following a closed session that featured discussion yet resulted in no further action, the subject of a burn ban was brought to attention.

On. Oct. 14 at 8:00 a.m., Clark County was placed under a burn ban by order of Clark County Judge-Executive Henry Branham.

Magistrate Robert Blanton favored imposing a penalty for those violating the ban.

“I understand there’s always the possibility of an accidental fire or piece of equipment catching on fire,” he said. “[Yet] if an individual starts a fire [and] the Fire Chief has to go out and risk the lives of the firefighters and there’s a risk of property burning down… It’s kind of useless to have a burn ban in place if there’s no penalty.”

From talks with Clark County attorney William Elkins, Blanton suggested that some fines could apply. Chief Steve Asbury of the Clark County Fire Department had also been involved in discussions.

An initial suggestion by Blanton would be to have a local ordinance letting others know that a violation could be met with stiff penalties for those who violated the ban.

After a discussion that included Asbury, William Elkins spoke.

Ultimately, the fiscal court took no further action at this time.