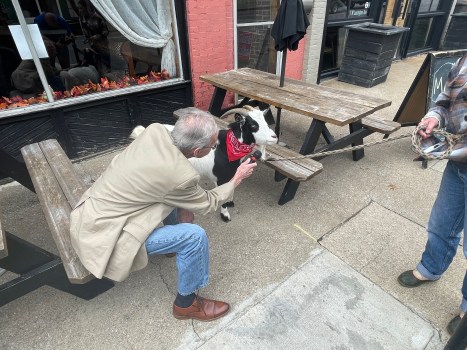 Mater the goat is "interviewed" by Tim Smith of WWKY before his campaign walk. (Photo by Matt Cizek) 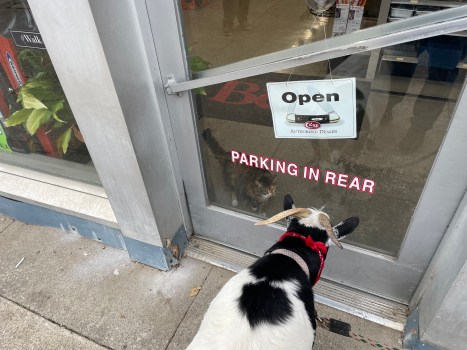 Some "voters" challenged the candidate on the issues. (Photo by Matt Cizek)

It’s easy to get caught up in the stress of Election Day.

Mater, a two-and-a-half-year-old Tennessee fainting goat, was recently walking around downtown Winchester on Wednesday as a candidate for the unofficial honorary animal mayor of Winchester.

Mater is owned by Chad and Jill Walker, who also own and operate The Engine House Pizza Pub at the corner of Lexington Avenue and Wall Street.

“We’ve been taking a lot of pictures with him, promoting things [including] different businesses downtown,” said Jill Walker. “He’s the most social…He enjoys being around people. He’s very humanesque.”

Mater is one of six goats and the only male to be on the farm owned and operated by the Walkers.

The farm’s location, in Lexington and just outside of town, poses a challenge.

However, it hasn’t deterred the determined candidate.

“Technically [he’s] not even eligible, but he doesn’t care,” Walker said. “He’s got field to graze and other little goats to terrorize.”

Mater started his pleasant walk up Lexington Avenue before turning left and walking down Main Street.

En route to the courthouse, the goat did his best to clean up the community by chowing down some corn kernels left along the side of the road.

“The world is his buffet,” Walker said.

As he continued his walk, Mater ate several items, including leaves and flowers.

Interested individuals could pet Mater or hand out animal crackers that the animal could easily chew on.

One resident showed joy, stating that she had never petted a goat.

Mater stopped at a number of businesses for photo opportunities, including Frames on Main, Pit Masters BBQ, and Mason on Main antique store.

He also got into a staring contest with a neighborly cat from D&S Hardware.

After Mater returned to Lexington Avenue, the staff of Loma’s even took a break from their daily schedule to introduce themselves to this new furry friend.

Tim Smith, the host of Mornings on Main, even took the time to interview the goat.

Not wanting to be without a campaign pledge of his own, Mater looks to focus on a few key issues.

“One of his big campaign pledges is crosswalk safety,” Walker said. “Mater wants to make sure that people that cross streets here, two- or four-legged, can get across safely.”

Promoting safety is an issue dear to the Walkers.

As such, stickers with slogans – one saying “I Break for Goats” – were handed out.

Though free of cost, one had to perform a certain deed before receiving the stickers.

“All you’ve got to do is come down and raise your right [hand] and pledge to always cross at our stopping crosswalk,” Walker said.

While all in good fun, one potential hope is that this action can lead to future, impactful collaboration.

“We’re really hoping that in the future, the true mayor of Winchester will possibly let us do a yearly animal mayor…that people will pay to vote for,” Walker said. “All that money will go to maybe an animal shelter or spay and neuter program. We’ve got a lot of ideas…And hope to use them to help this community.”

More information can be viewed on the Mater for Mayor Facebook page.