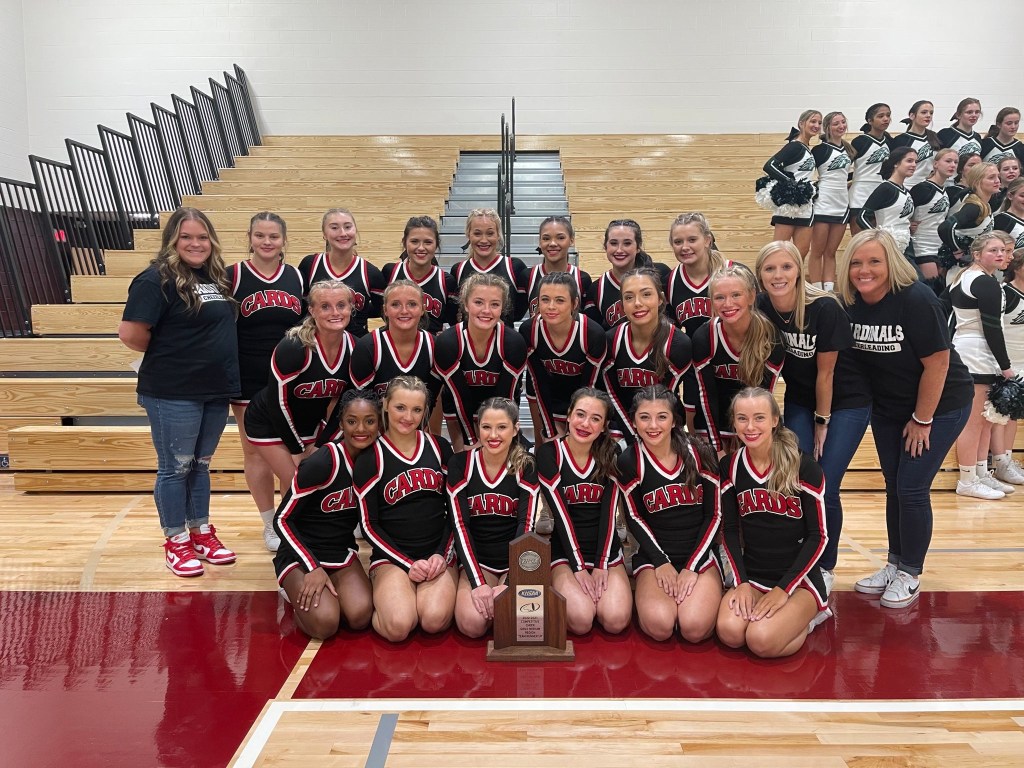 If ever there was reliability at George Rogers Clark High School athletic events, you might find it just off the playing field.

The George Rogers Clark cheerleading squad, active at many events, will soon have its own chance to shine at the state level.

From Dec. 9-10, the squad will participate in the 2022-2023 KHSAA State Cheer Championships to determine who is ranked as the top high school cheerleading squad in Kentucky.

They earned their right to the competition after finishing second in the regional competition on Saturday, Nov. 5, at Tates Creek High School.

“[It was] a very good performance, a very solid performance for the girls,” said GRC Head Cheerleading Coach Jerrica Whitaker. “They take the top two [teams] to state.”

The race for regional champions ended up being notably close, with the Cardinals’ cheer squad only finishing in second place by .55 points.

With a squad of nineteen girls, the team will be judged on several criteria during a routine that lasts two and a half minutes.

Among them are jumps, stunting, crowd involvement, dance, difficulty, technique, and execution.

They will compete at the medium varsity level, designed for 16 to 19 competitors.

Beforehand, the girls will take part in the UCA Regional Competition at the Central Bank Center in Lexington on Nov. 19.

There, they expect to gather some information that can assist later.

“We’re preparing for it, and then we’ll turn around and prepare for state,” Whitaker said. “We’re going to make some changes that judges recommended, [and] try to just get better. That’s kind of been our motto.”

For the cheerleading squad, composed of ten seniors, it’s also the second consecutive year they’ll compete at the state competition.

However, the path was not always an easy one.

The squad was challenged in 2020 when COVID hit during what was also coincidentally Whitaker’s first year coaching the team.

“We had to wear masks, the girls weren’t allowed to stunt, [and] they had to stay six feet apart – which was very difficult,” she said. “In cheerleading, you’re trying to lift and throw each other up. So, the first year was a very difficult year just trying to even be able to cheer…It was more just a building year.”

However, while this created never-before-seen challenges, many girls from that squad have continued to improve.

“Overall…these girls have stuck with it and really fought through all of the challenges”, Whitaker said. “I think now that’s made them stronger.”

Times for the competition are yet to be released.