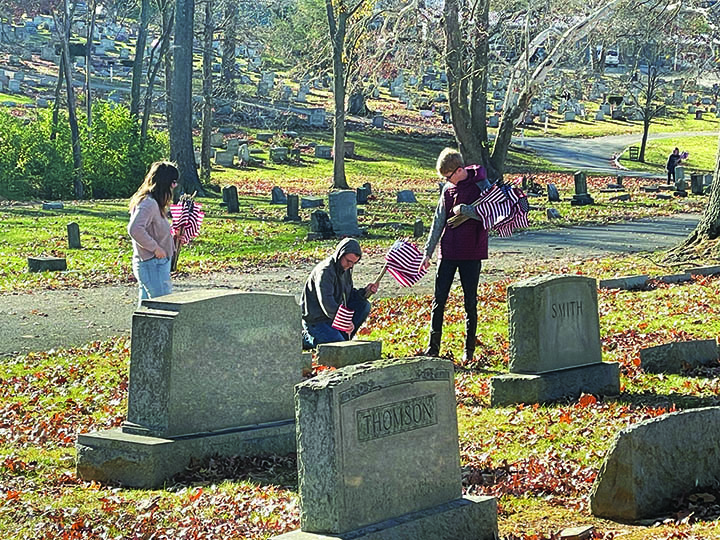 Paying respects to veterans is common around and during Veterans Day.

The JROTC members from George Rogers Clark High School took such an opportunity to heart.

On Tuesday morning, a group of 40 cadets made their way to Winchester Cemetery along Lexington Avenue and placed American flags next to the graves of deceased military personnel.

“Veterans hold a special place for us and for the other cadre here in the program,” said Master Sgt. Larry Lee, who helps lead GRC’s ROTC program. “This is the least that we could do for those that have volunteered to serve our country over the years.”

The event started early in the morning, as cadets gathered and awaited instructions on how to do the task.

They were split into four groups and sent in separate directions to help distribute the approximately 700 flags brought for the occasion.

It is one of two times – along with the week before Memorial Day – when the JROTC program performs such an occasion.

The event has been a tradition for some time now.

“We’ve done it every year since I’ve been here…I’m in my tenth year now”, Lee said. “We give a briefing during school before the kids come out here so they kind of know what to expect [and] what to look for on the tombstones.”

Many tombstones have specific markings signifying the deceased as a veteran. Examples are shown during the briefing to give students a better understanding of what to look for ahead of time.

“There are some markers, like the VA marker, that…a lot of people see”, Lee said. “[It is] kind of a bronze color. Those are very, very common, and typically those are at the foot of the [headstone].”

They give particular directions on how to place a flag.

Specifically, it should be placed in the ground six inches to the left and six inches in front of the headstone, followed by a salute.

For many of those participating, the event held special meaning.

Joel Layne, a sophomore in his first year with JROTC, has a family background in military experience.

“My dad was a Marine, and my cousin just recently joined the Marines. The military has always been a part of my family”, he said. “It feels nice to be able to respect those who have died for our country.”

The award-winning JROTC program has also served the school and community in other ways, such as providing parking detail at football games and participating in Military Appreciation Night.

As for Tuesday’s event, the experience has reaped the rewards.

“Over the course of the years, we’ve actually run into a lot of family members out here while we’re doing this that maybe their loved one’s headstone was not marked as a veteran,” Lee said. “They have notified us of that, and we actually put them by name in the briefing…I’ll go myself and put flags on their graves.”

JROTC staff hopes that students find reward through the task.

“What I would like the cadets to get out of this is…Respect what the veterans have done for them in the past regardless of what war or how long ago it was”, Lee said. “At some point, the people that are buried here, they’ve done something that others are not willing to do.”

To anyone wanting to learn more, the JROTC program welcomes communication by contacting Larry Lee at larry.lee@clark.kyschools.us.