Two Winchester churches to offer Thanksgiving meals for those in need 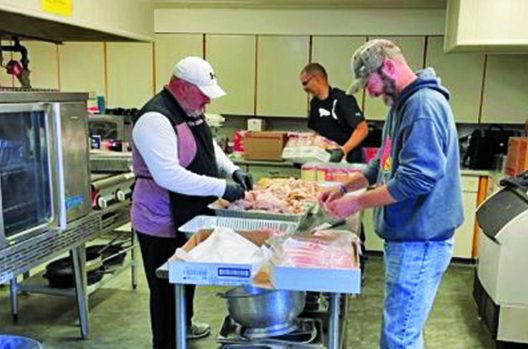 Serving others has always been a core mission of churches throughout Winchester.

This Thanksgiving season, traditions will be no different.

Among several, both Grace Bible Church and First United Methodist Church will put together free lunches for guests to accept.

“The church has been in existence over 19 years, and I would say a minimum at least 18 of those 19 years we’ve done this,” said Lee Cruse, Pastor of Grace Bible Church.

The Methodist tradition stretches back even further.

“This started back in the 1960s. We started it with just taking care of some of our shut-ins and some of the people in our church family,” said Bob Jackson, a First United Methodist Church member.

Though not all churches perform functions the same way, there are some definite similarities.

Both will have volunteers come in on Wednesday to help prepare meals featuring a variety of foods. While turkey and mashed potatoes are standard, individuals can enjoy different delicacies, such as green beans, stuffing, pie, casserole, and much more.

At Grace Bible Church, visitors can indulge in food from 5 p.m. to 8 p.m.

“People come in, we seat them just like they would if they went to a restaurant, [and] our people serve them,” said Cruse. “We’ve been doing this now for all [these] years, and we’ve been blessed by doing it… It’s a great night.”

Though in-person is typical and preferable, offering a carry-out meal will be considered on a limited basis, depending on individual needs.

Just like Grace Bible Church, First United Methodist Church uses the generous efforts of dozens of volunteers to make meals and feed others.

They also acknowledge that one of the positive outcomes is seeing community churches come together.

“It’s just a good Christian outing for all of us,” Jackson said. “The greatest thing is it’s a lot of churches coming together for one common good.”

While First United Methodist Church will have a meal at the church offered between 11:30 a.m. – 1 p.m., they deliver meals as well.

Traveling to locations that include Brown Proctor Apartments, Phoenix House Apartments, Beverly P. White Apartments, and Beacon of Hope Emergency Shelter, between 1200-1300 meals will be delivered. Adding those who eat in person or take out, over 1300 individuals are likely to benefit.

“The people are so anxious to get that meal, and some of them say it’s the best meal they’ve had in a few days,” Jackson said. “It’s just one of our callings that we have done… It’s part of what God wants us to be doing.”

Cruse agrees, saying that it helps fulfill the church’s mission of leading others to Christ. He also adds that, after all, that has taken place the last few years, Grace Bible Church – which also has a clothing ministry and offers to feed the community four times weekly – is starting to see growth once more.

“Now we’re back doing it again, and the numbers are starting to come up,” he adds. “Clothing and feeding and all this other stuff are things I think the Lord has called us to. As a church, that’s what we’re supposed to be doing.”