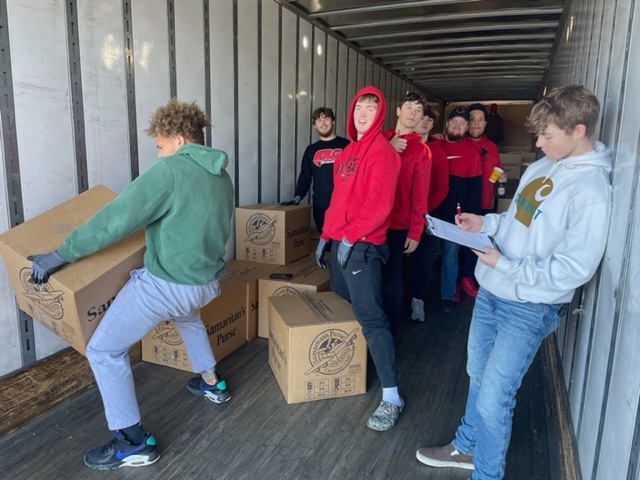 Every year, dozens of adolescents in poverty or other underserved communities lack essential resources that the average population might take for granted.

While it always looks to provide others with resources and the Christian gospel message through Operation Christmas Child, Samaritan’s Purse recently teamed up with George Rogers Clark High School.

Specifically, thanks to help from George Rogers Clark High School’s football team, 816 cartons filled with 12,924 shoe boxes were loaded on Monday, November 21, to be sent worldwide and help children most in need.

“Wow” items, as they’re known, could be toys, sporting equipment, and more.

Several churches throughout Winchester are involved in collections or can receive donations.

The donations were dropped off at the First Church of God, located off Colby Road.

The boxes are later sent to boys and girls in difficult conditions or hard-to-reach countries.

“They have never [received] a gift before,” Conn said. “It’s also a gospel opportunity. They are given an opportunity to learn about Jesus’ love, and a discipleship class called The Greatest Journey.”

According to the website of Samaritan’s Church International, The Greatest Journey is a 12-step discipleship program designed to help children discover how to follow Christ and share God with others. An eventual goal is to transform entire families and communities through the gospel’s message and start churches.

Nearby, Operation Christmas Child continues to be involved in a number of additional communities.

For example, Estill, Menifee, Bath, Montgomery, and the cities of Berea and Richmond all take part.

To do so, Conn – an Ashland native – received assistance from what could at first seem to be an unlikely source.

Clark County Superintendent Dustin Howard, who grew up near Ashland, previously went to the same church with Conn – who also worked alongside Howard’s mother.

After she reached out to him, he got in touch with the administrative staff at George Rogers Clark High School.

From there, the football coaches – including assistant coach and Offensive Coordinator Jordan Ray – were contacted about possibly doing a service project.

Without hesitation, Ray and the staff agreed to take part.

Assistant Coach Jordan Ray states it was a valuable experience and will be an excellent lesson for the youth.

“We thought it would be a great opportunity for our kids to give back to our community,” he said. “In between loading-trucks, the players had the opportunity to go inside the church and eat lunch with the members ad all the volunteers who were helping.”

Conn agrees that the players’ efforts were essential for success.

“They came about 11 o’clock, and worked with us until about 3:30 that day and were such an important part of loading that truck”, she said. “During weekdays, there’s not a lot of men who can come and help that way. These big strong boys really, really helped out.”

Starting in 1993, Operation Christmas Child looks forward to continued efforts of serving children and connecting them with the Christian Gospel worldwide as it reaches nearly 30 years of dedication.