A cook-off for Kam 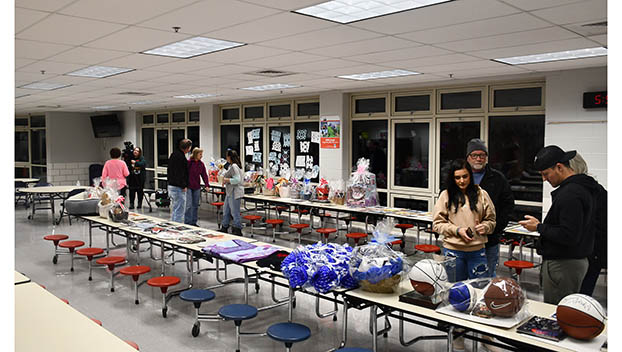 This past April, adolescent Kameron May suffered critical injuries after a fall from a building in downtown Winchester left him with multiple skull fractures, broken vertebrae, and brain damage.

Once again, the people of Winchester have come together to provide support.

“We’re trying to do our last push to get money for Kameron to get a wheelchair van. He needs a better way to transport rather than being in a car”, said Sharon Davis, Kameron’s grandmother. “We needed about $7,000 to get the van, and I think hopefully we’ll get it.”

While the overall goal might have been to raise money through the silent auction, the chili cook-off tied into the event was also a success.

Between 10-15 examples were available to be sampled, with some including pasta, extra spices, and various other unique qualities.

Items that attendees could bid on met several needs.

Anyone interested in sports could bid on choices like a gift card from Hibbett Sports, a Winchester Little League Voucher, an RDC Boys or Girls Basketball 2023 Package, or Cincinnati Reds Tickets. Signed memorabilia from UK greats Kenny “Sky” Walker and the 1978 National Championship-winning Wildcats basketball team was also available.

“We’ve got everything from services to packages to quilts, and you name it,” Davis said.

Much of the bidding took place online, where many people learned of the event.

“Posting on Facebook is the biggest thing as far as getting the bids, but I just went around and asked if people would donate something,” Davis added. “We had a quilt sent from Texas [that] a lady made.”

The gifts are advantageous for Kameron’s family, which has been challenged during his recovery.

“It means a lot. I know a lot of kids, a lot of children, a lot of his friends [and] even their families [have] been so supportive”, said Kameron’s uncle, Michael Hilario, who helped at the event along with girlfriend Madison Grimes. “They’re always coming out and supporting prayer groups and things of that nature.”

Though raising funds to purchase a wheelchair van is a primary focus, Davis also hopes that any leftover amount is used for additional medical expenses.

And, though it may be some time, it doesn’t appear that Friday’s event is the last time efforts get made to support Kameron.

“We won’t do another fundraiser until maybe another baseball tournament in the spring,” Davis said. “Until he recovers, he’s going to be needing a lot.”