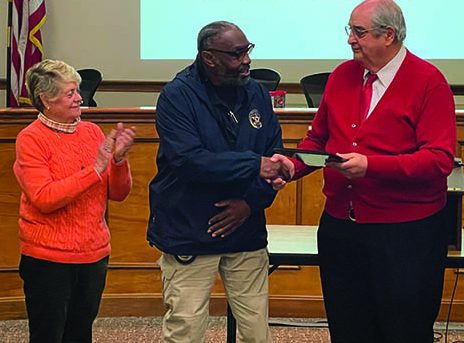 Outgoing City Commissioner Joe Chenault, seen in center, is rewarded by outgoing Mayor Ed Burtner, seen on the right, for his service over the last year. Mayor-Elect JoEllen Reed, seen on the left, applauds. (Photo by Matt Cizek)

Thank yous and tributes were paid at the last Winchester City Commission meeting of 2022 last Tuesday morning, and the position of Marketing and Events Director with the Winchester First Board has been approved.

As such, those in attendance greeted him with a standing ovation not once but twice.

Yet another city commissioner bid adieu as well.

City Commissioner Joe Chenault, who works part-time as a bailiff at the Clark County Detention after retiring from East Kentucky Power Cooperative, sat as a city commissioner for the final time.

In addition, Chenault has sat as the Chairman of the Urban Renewal Board while serving youth as an official for little league basketball and baseball and performing several additional duties.

Chenault was appointed to the position in January 2022 following the resignation of former City Commissioner Ramsay Flynn.

He would not go unrewarded.

“As a citizen of Winchester, Joe has given exemplary service,” said outgoing Mayor Ed Burtner. “I want to say thank you to Joe publicly. I appreciate your service very much.”

Chenault was rewarded with an honorary plaque.

In other news, the position of marketing and events director with Winchester First Board was discussed.

As detailed in a previous city commission meeting, the marketing and events director position is responsible for several duties.

Among them would be to plan, produce, and supervise the execution of communications and marketing plans such as promotions, collateral materials, and media.

Also, they would be tasked to coordinate, implement and prompt programs and events adopted by Winchester First. These events could include but would not be limited to the Beer Cheese Festival, Halloween Main-ia, Christmas Parade, and Rock the Block.

Some public speakers agreed with having the position.

“I think that the city considering this position is a win-win for the community,” said Nancy Turner, the executive director of the Winchester-Clark County Tourism Commission. “I feel like some of the people who are still opposed to this have never seen a Main Street partnership that worked…While this isn’t a Main Street partnership, it is still better for the betterment of downtown.”

Peggy McAllister, a board member of Winchester First, stated reasons she is in favor include avoiding turnover from other board members who felt overwhelmed handling the duties of the Marketing and Events Director.

“This is not something that just a bunch of volunteers can do,” she said. “We all have businesses, full-time jobs. We’re doing renovations…we need someone to be that conduit to bring us all together.”

Not all were in favor.

“We’d petitioned to postpone this so that we could allow for more businesses to be here,” said Chad Walker, the co-owner of Engine House. “I just..don’t have that level of trust going forward that this massive salary [is necessary] in marketing and promoting our downtown.”

Reasons given by Walker included the suggestion that they were reverting to the same mission statement as Main Street Winchester – without change.

Adam Kidd, the COO of Dam Holdings, LLC, spoke against the position also while stating that nearly 200 signatures were received from local business owners also in opposition.

“I’ve managed companies that have had hundreds of employees, and we work in cities all over this country with different Main Street programs, with different non-profit groups,” he said. “The one consistent truth is the only way that this is successful is businesses marketing themselves…in none of those other cities and other markets that I work in is [the] government doing this for them.”

In the final vote, the commission voted 3-1 to approve marketing and events director position for Winchester First.

Commissioner Shannon Cox was the lone dissenting vote, with Commissioner Kitty Strode recusing herself from voting.