High Side Project gets input from public 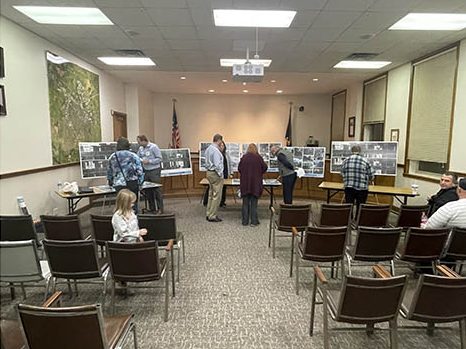 The public had the chance to give its input at the forum for the High Side Project last week. (Photo by Matt Cizek)

For some time, the Main Street High Side Project has been discussed.

This last Thursday, residents had a chance to gain further insight and provide their input.

At City Hall from 5 to 7 p.m., Palmer Engineering and Element Design representatives were present to answer the public’s questions and more.

“We have our ideas of things that we can think of, but we haven’t had any kind of public input from business owners or anything like that,” said Stephen Sewell, Vice President of Palmer Engineering. “[That] is what the point of tonight was.”

As a part of the project, multiple changes will occur, and different approaches will be under consideration.

For example, two options for parking on the High Side street along Main Street exist, stretching from Lexington Avenue to Broadway Street.

Also, multiple ideas about enhancing the surrounding environment are points of interest.

For those who attended the event, a questionnaire allowed an opportunity to communicate with members of the Palmer Engineering team.

Individuals got asked a series of questions: how many times they visited the downtown area weekly, which on-street parking they preferred, what the most critical improvement to the High Side Project is, and which aesthetic they would like to see implemented.

Considerations for what they’d like to see improved include ADA accessibility and more expansive walking areas.

The Project Team would receive answers for evaluating the alignment and other features of the project.

Attendees could view several different design models and place stickers on up to three examples to determine what they would like to see most.

Kenny Book, who will soon begin a term as City Commissioner, was present for the event.

While showing interest, he also raised his concerns.

“We’ve had Bradford [pear trees] on Main Street, and that wind will just come in and take it off right at the top,” he said. “Those trees, even in the neighborhood, when the wind blows, it just splits them right down the middle.”

The Main Street High Side Project is still in its early stages.

“It’s all in the plan development,” Sewell said. “We’ll be doing plans and designs to get cost estimates for a final option…Design is probably going to happen over the next year, and then [we’ll] look for funding in the future.”

Ultimately, representatives see the project as fully enhancing the community.

Sewell was asked what he hoped to see as the result of the day’s event.

“I think to see the vision that business owners and the residents in downtown Winchester [have], and where it’s going as we go into the future,” he said.