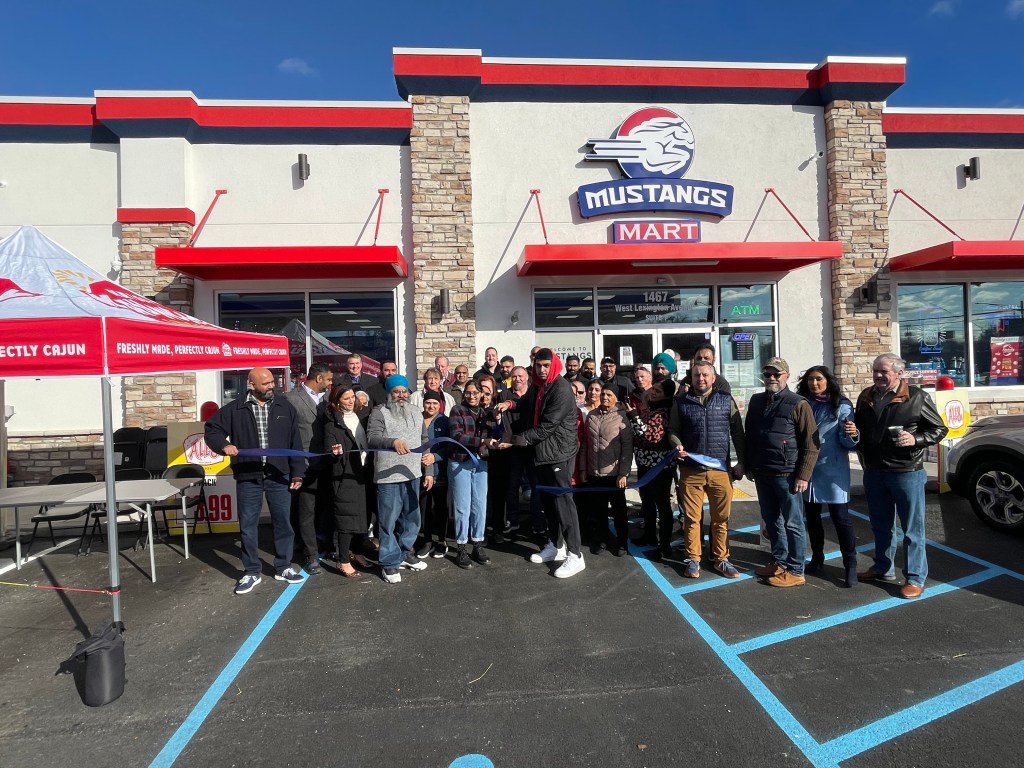 While a Marathon gas station has been noticed previously at the corner of Bypass Road and Lexington Avenue, the area nearby historically hasn’t received as much attention.

After last week, facts have changed.

Mustangs Mart and Liquor celebrated its grand opening and was officially recognized by the Winchester-Clark County Chamber of Commerce, who praised the occasion with a ribbon-cutting ceremony.

“This used to be an old gas station. We [have] owned it since 2009”, said owner Parminder “Judge” Manak. “We decided to redo it completely, so we demolished the building and rebuilt it as a gas station and also the liquor store.”

Also, a special promotion was present because the liquor store features a wide variety of bourbon choices.

“Anybody can spend $100 and enter [for] a raffle for a special drawing”, Manak said. “We have special bottles at a very discounted price.”

The store also had different products, including chardonnay, craft beers, whiskey, and more. A drink distributed through Chi-Chi’s could be chosen from too.

Yet customers looking for non-alcoholic beverages will also have a cause to celebrate.

For lunch or dinner, people can enjoy Hunt Brothers Pizza.

A drive-thru will likely be present for potential customers.

Joshua Moore, President of JMoore Construction, completed the design-build of the project.

He said that community support played a prominent role in its development.

“The site was much smaller that it is now, and the site was very challenging”, he said. “We were able to work through that with local community people, banks, Judge…and I think we were able to [build] a convenience store gas station that’s roughly 5,000 square feet. I think there [are] 22 pumps.”

“It’s super rewarding because you partner with the owner who has a vision or dream, and you play a role to bring that to life”, he added.

Cory Johnson served as a consultant on the project.

“They did a soft opening about a month ago. Once the beer license and liquor license were in place, then we contacted Cindy [Banks] with the Chamber of Commerce”, he said. “These guys work hard.”

With hard work came dedication to customers at the event.

Those present were treated to Krispy Krunch Chicken while an outdoor vendor offered examples and information about Celsius Fitness Drinks.

Gas was 25 cents cheaper for the day thanks to aid from Kentucky Petroleum Supply.

Appropriately, “Mustang Sally” was one of the tunes attendees could hear.

For Manak, the day was highly worthwhile.

Being recognized by the Winchester-Clark County Chamber of Commerce and seeing the project come to fruition has arguably been the most rewarding experience.

“I feel proud,” he said. “I’m very proud to be part of the community, [and] make Winchester nicer.”