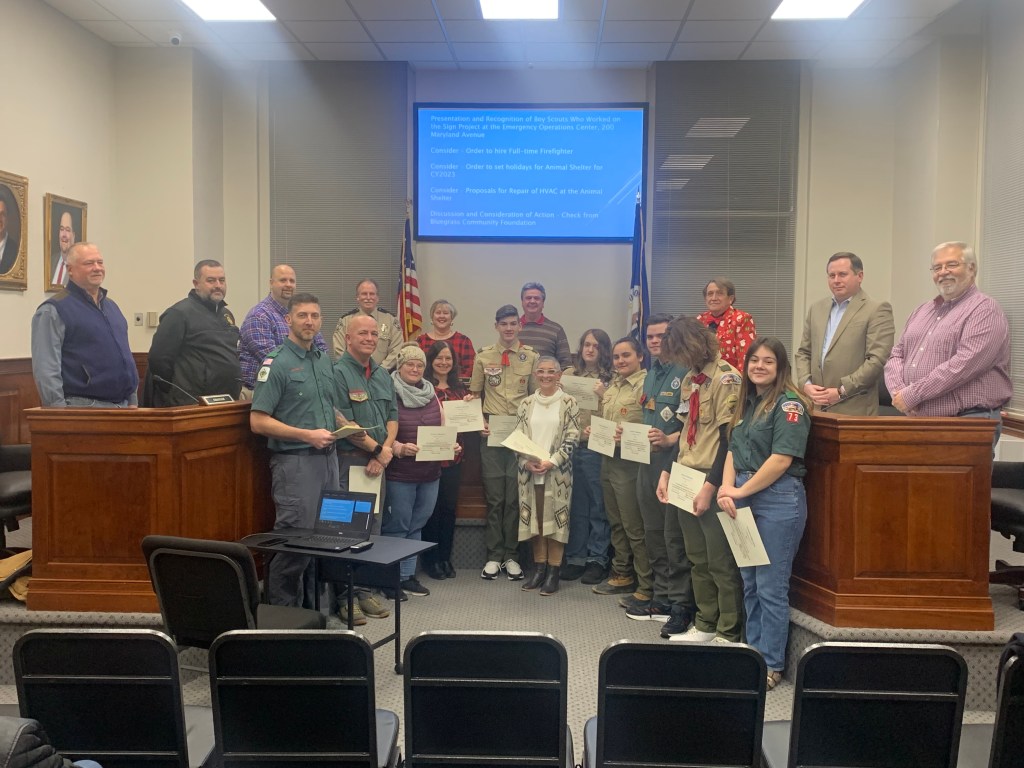 At a special meeting of the Clark County Fiscal Court – the last before Christmas and the final session of 2022 – several mentionable events took place as usual.

A group of boy scouts was honored for their work in the local community, and a consideration of what to do next regarding a check from the Bluegrass Community Foundation took place.

First, the boy scouts of Troop 56 were presented with an award by Perri Wilson.

Wilson, who directs the Chemical Stockpile Emergency Preparedness Program (CSEPP), needed a sign to be built at the office located at 200 Maryland Avenue.

Outgoing Clark County Judge-Executive Henry Branham had initially suggested that help be sought from the Boys Scouts when looking to complete the project.

“The sign at the [Emergency Operations Center] was the construction sign. It was put up when they first broke ground in 2014, and needless to say, it was beginning to show wear and tear, and it was kind of leaning”, said Wilson. “Henry said, ‘Have you thought about reaching out to the scout program? They need to always have something to do for community service, or for their badges.’”

After hearing from Boy Scout Troop 56 leader Misty Gay on Mornings on Main with Tim Smith, Wilson was put in touch with the leader.

From there, members were brought to the EOC to perform the task.

With that information, several different members of Troop 56 who were present received honors with a certificate of appreciation “for [their] contribution to the preparation and construction sign of the entrance sign [of] the Emergency Operations Center.”

The eight troopers present took a photo surrounded by Clark County Judge-Executive Henry Branham, magistrates of the fiscal court, and other county staff.

“The scouts have done tremendous things for this community, all over the city and the county as well,” added Branham.

In other news, a check was mailed to the Clark County Fiscal Court last week, though it was the same amount offered in October.

Nevertheless, the check and the letter that came with it were accepted, with Clark County Attorney William Elkins providing some assurance.

“I think the letter is the material issue. Any money [and] any passive income that was generated still remains in your fund. It will generate income,” he said. “You can consider…any amount that’s the difference reinvested. You’ll draw funds on that next year, so I don’t think there’s any harm in not having that in there.”

The motion to approve the check and letter was accepted unanimously.

Certainly not least, with this meeting being the last of 2022, Magistrates took time to show gratitude.

“I’d like to thank the voters of Clark County for allowing me to serve them for the past seven years,” said outgoing Magistrate Greg Elkins. “[I] appreciate that, and am honored to be able to do so.”