Branham says goodbye after over ten years as county judge 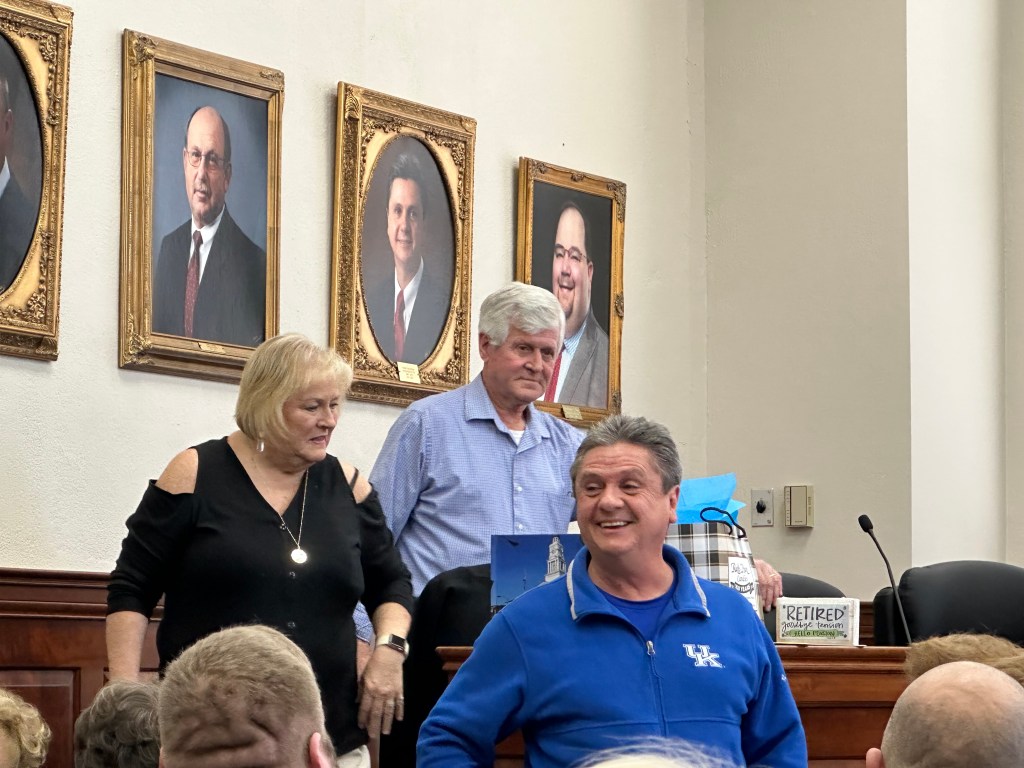 Cutline: Clark County Judge-Executive Henry Branham smiles while speaking to the crowd at his retirement ceremony. His wife, Gloria Branham, and successor Les Yates can also be seen. (Photo by Matt Cizek)

They say all good things must come to an end.

At noon, a surprise retirement ceremony at the Clark County Fiscal Courtroom inside the courthouse celebrated Branham’s career.

“It’s bittersweet,” said Judge Branham. “I’ve enjoyed working for the county over the years and for the citizens of Clark County, but I’m excited to get to do some things – especially spend a lot more time with my grandkids.”

However, following the untimely passing of former Clark County Judge-Executive Chris Pace in October 2021, he returned to the office once more to fill the remainder of Pace’s original term.

Having not run for re-election this past November, Branham will be replaced by newly sworn-in Clark County Judge Executive and former Kentucky state representative Les Yates.

However, his influence will be close if needed to be called upon.

It’s a lesson taught to him by the late former Judge-Executive James B. Allen.

“I’ve been working with him all along, and I told him that after I leave office, then I’ll still be a phone call away because I had that opportunity with Judge Allen,” Branham said. “I was a magistrate when he was county judge, so when I took office, I would call him.”

Many from throughout the community were present for the event.

The event was planned by Judge Branham’s family, who intended for it to be a surprise.

“They pulled one over on me,” he said in jest.

A native of Clark County, Judge Branham’s interest in serving Clark County began at a young age – long before his initial appointment to any position.

“I can remember coming to this courthouse as a young boy. I remember meeting the county judge when I was 13 years old”, he said. “ It gives you a little different perspective…being from around here. Then, all of a sudden, you’re in here doing the work, and it’s a little bit surreal.”

Branham was honored with handshakes and hugs from various attending individuals, a showing of gratitude for his years of service.

However, he also pointed out that others had been essential – as was stated when first introduced.

“I see a lot of faces in this room that have been a lot of support to me, and I don’t know what else to say except…we try, we learn, [and] we get up. Thank you all very much”, he said.

In his years of service, Judge Branham has been exceptionally pleased with the ability of city and county governments to work together for community growth.

“I got to work with a real good mayor when I first came in office, and we were able to kind of transcend the normal city [and] county boundaries,” he acknowledged, referencing former Mayor Ed Burtner. “We tried to do away with those for city and county government to work together seamlessly, and we’ve accomplished a lot for that goal.”

And while Branham looks forward to a retirement spent with his wife, daughter, and grandkids, he will miss the people who have worked beside him.

“They give a lot and expect little. That’s one thing I’ll say about them – just a great group of people over the years”, he said.

Cutline: Clark County Judge-Executive Henry Branham smiles while speaking to the crowd at his retirement ceremony. His wife, Gloria Branham, and successor Les Yates can also be seen.