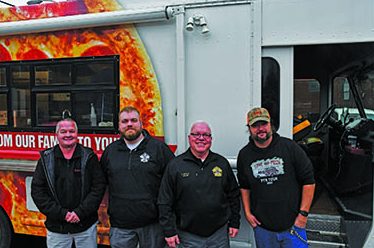 The holidays are considered a time for giving.

On the Thursday before Christmas, Hunt Brothers Pizza made a special delivery.

At the Clark County Detention Center, several dozen pizzas were delivered for inmates and staff to enjoy this holiday season.

“Pizza makes people smile”, said Chris Clem, Safety & Warehouse Specialist for Hunt Brothers. “This is creating opportunities for people through love and pizza. When people see pizza, they light up!”

In total, over 60 pizzas were delivered with the means to feed approximately 260 individuals.

Hunt Brothers Pizza, the leading gas station pizza brand in the nation, began in 1991 after being founded by four siblings. It remains a family-owned business to this day.

It could perform the work needed in collaboration with the previously mentioned Hunt Brothers.

Located out of Paris, the company brought their truck – affectionately called the “Pizza to the Rescue Truck” – for the occasion.

“The team members here from Hunt Brothers Pizza volunteer their time to serve on this truck to serve their communities”, Clem noted.

Winchester is one of many communities that have benefited from its services.

“People in there this time of year, they’re already down. They’re somebody’s family member,” said Hatton. “They need something to give them a little bit of light when they’re in a dark spot.”

While trying to raise money via social media, Hatton was contacted by Clem – who then suggested knowing of a way to help by offering the pizza.

Yet that’s not all!

“[I] also asked if we could get a bottle of soda for all the inmates, and we raised money. I had about six people donate to that”, he said. “This year, we were able to give them all 20-ounce soda.”

To the many that participated, the project has a strong sentiment at this season.

“The families actually have messaged me before and said that their family [member] that was an inmate in there just said, ‘thank you very much’”, he said. “Thats just why I keep doing it…to give them some Christmas around this time.”

For Clem and Hunt Brothers, the four founding principles to be guided by are to put God first, bless others, trust God to meet their needs, and strive for excellence.

When shown the task at hand, Hunt Brothers was more than willing to go along with it.

“This is part of being a blessing to people. We will cook and help raise money for churches and non-profit organizations using this truck”, he added. We do it for God’s Pantry, we do it for Catholic Action, [and] all kinds of different 503(c) [organizations] throughout central Kentucky.”

Editor’s Note: The print version of this story mistakenly spelled Chris Clem’s last name as Clen and referred to Hunt Brothers as Pizza Wholesale of Lexington on a few occasions, which is the company’s official name, it distributes Hunt Brothers Pizza which is what they are usually referenced as in the media.