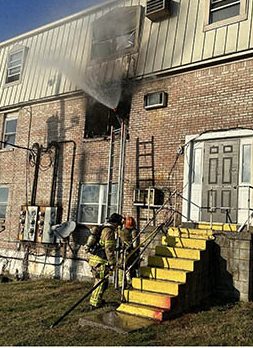 On the afternoon of January 10, the Winchester Fire Department responded to an apartment fire at 350 Oxford Drive.

While the blaze did not last long, the incident temporarily displaced six families.

“The fire was knocked down pretty quick, in about ten minutes or so,” said Battalion Chief August Fisher. “Six families were displaced; no injuries to anyone. [American] Red Cross did come in and help with finding them a place to stay.”

According to the Winchester Fire Department Facebook page, Rescue 2 made the initial fire attack to put out the blaze, while Engine 1 assisted and helped secure the water supply.

They primarily contained the fire to a single apartment and common hallway.

Truck 3 crews performed a primary search of the surrounding area to determine if future problems might be likely to occur.

Families must be temporarily displaced mainly due to electrical power and other utilities getting disconnected from the building, and some apartments have suffered smoke damage.

“[We were] looking for any hidden fire, or what we call an extension [such as] where an ember could still be in a wall,” Fisher said. “Over time, they can reignite after we leave. We definitely don’t want that to happen.”

“It went pretty well. Those always make you nervous because they’re such a high-life hazard,” he said. “The guys did a great job. We made a quick knock-down on it for as much fire as they had. [Lt. Seale] got some serious hands-on experience that day.”

The cause of the fire remains undetermined.