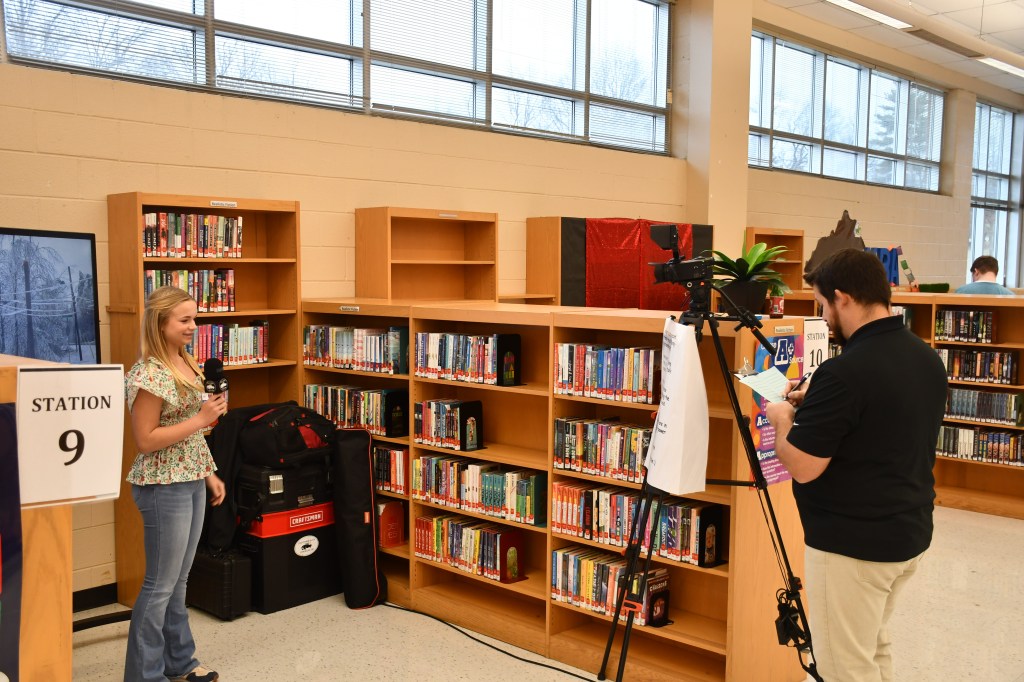 A student reads a mock weather report while participating in the Amazing Shake Competition on Monday morning. (Photo by Matt Cizek)

In the age between elementary and high school, middle school is an opportunity to develop several skills and learn practical lessons for daily living.

Starting with 125 students chosen based on their presentations in social studies class, the first two rounds of participation in the Amazing Shake Competition took place in the school’s cafeteria.

“It’s really about teaching students soft skills, business skills, professional skills, [and] how to think on their feet,” said Taylor Bumgardner,an 8th Grade Social Studies Teacher at RDC. “[It] kind of [prepares] them for the workforce in life after they are out of school in whatever profession that they are going to pursue.”

The Amazing Shake Competition is a public speaking and life skills project started by the Ron Clark Academy in Atlanta, Georgia.

Described according to its official website as a “dynamic and exciting live competition that rallies leaders and role models in a school’s community together to teach students about professional skills for success”, the National Competition will take place from March 17 – 19.

The school will send three students to Atlanta for the competition, where prior students have finished in the top 10.

On Thursday, Jan. 5, students had to walk around to different judges, who scored them on a scale of 1-20 on conversational abilities.

As one might expect, part of what they had to do was shake the judge’s hand.

Afterward, they were to ask several questions.

While it varied, some of the questions included the judge’s occupation, how their day was going, or what they liked to do in their spare time.

Among them was Clark County Attorney William Elkins.

“RDC has a great history of having very well-developed and talented students [that] have participated in this event before, and I’m always shocked at how well they perform,” he said. “I’m here today anxiously waiting to see this new crop of kids, who I’m sure will overwhelm me with ability and opportunity.”

On Monday, January 10, the competition continued.

Of the original 125 contestants, 75 took part in the Gauntlet round.

During this occasion, students went to 25 different stations and presented accordingly.

Stations included a White House Press Room mock-up in which they had to answer questions, deal with an angry customer played by real-life Engine House co-owner Chad Walker, present a weather report, choose their college, offer a New Year’s Resolution, and much more.

Tiffany Purcell, a supervisor at Pearl Interactive Network, agreed to participate while holding a mock job interview for students applying to work at Ale-8.

“It’s been very heartfelt to see all these children out here…doing their best to prepare to go back out into the world and real-life jobs after schooling,” she said. “The kids have been pretty well prepared. The answers that we’ve gotten so far…they’re very well thought out.”

One of the participants, 8th grader Carter Johnston, also participated in the competition last year.

He was asked about his favorite part of the contest.

“Just being able to talk to people that you might not know,” he said. “Anyone who is coming to RDC next year or is at RDC should definitely try this. It’s a good opportunity.”

“You can tell walking around [that] some of them are still nervous, but there are quite a few of them that you can tell are just having a really good time with it,” she said. “Those are the ones that are going to be able to do really well…because they can take it and run with it, and have fun with it.”

The Amazing Shake Competition continued on Wednesday, Jan. 11, at the Clark County Board of Education/Central Office, with the Circle of Doom round comprising the top 40 students from the Gauntlet round. It moves on to the Debate Round on Jan. 18th, at 9 a.m., at Robert D. Campbell Junior High School, consisting of the top 20 students from round three.

The top 10 students from the debate round will go to the Countdown Games in Lexington to compete in a breakout room in teams. Dates and times have yet to be announced. The top three students from this round will represent Robert D. Campbell Junior High School in the National Amazing Shake Competition in Atlanta this March.