Clark County Community Services director sent off with a surprise 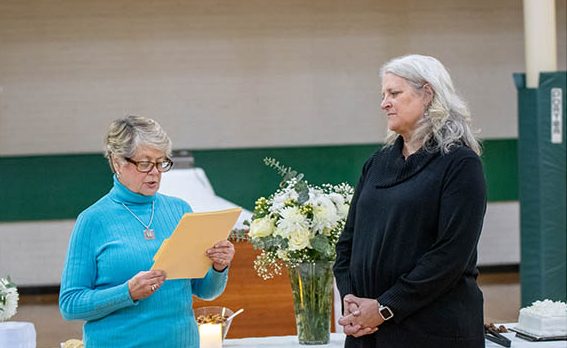 For over 25 years, Debbie Fatkin and her family have called Winchester home, and for nearly ten years, Fatkin served as the Director of Clark Community Services (CCCS) before resigning this fall.

With everything for a smooth transition, Fatkin will move toward southern Indiana to be nearer to family, including her parents and son, as she prepares to be a first-time grandmother.

However, the community made sure to provide her with a proper send-off in return.

On Wednesday afternoon, a surprise retirement ceremony took place at the Winchester-Clark County Parks and Recreation building to honor Fatkin and wish her the best as she moves forward.

“It is super bittersweet. I think that that describes it the best”, Fatkin said. “I am so excited to be able to take care of my grandchild who’s coming, but Winchester is home. I wasn’t raised here. I didn’t go to high school here. I didn’t move here until I was in my thirties, but this is home to [my husband] Mark and I. It is where we raised our children.”

As one might believe, some unexpected occurrences took place during the planning process.

“An email went out multiple times apparently, and I was in the thread…my staff was deleting things off my email,” Fatkin said in jest. “I’d have to go deal with something, and someone would go into my office and delete an email…they said they were exhausted!”

Attendees were treated to cake, cookies, and a bevy of treats.

Mayor JoEllen Reed gave a proclamation, followed later by a talk from CCCS Housing Director Tish Shupe – who hired Fatkin to the position.

Joseph Miller, Board Chair for Clark County Community Services, spoke while other board members were present.

Family Resource Coordinators from various Clark County schools also made an appearance, and representative Wayne McNiel of the Winchester-Clark County Association of Churches was there to officially announce that the transient ministry will be renamed the Debbie Fatkin Transient Ministry.

Winchester-Clark County Parks and Recreation Jeff Lewis was another speaker who paid tribute.

While Fatkin and her family will be away from Winchester, they’ll still call Kentucky their home state as they’ve found a house in the commonwealth.

And, in successor Laci Scarboro, Fatkin is comfortable that the future of Clark County Community Services is in good standing.

“I’m handing it over to great hands, someone who’s very passionate about our community [and] what we do in this building,” she said. “This agency has grown substantially since it was started in 1975…Winchester is a great place to live. Please continue to bless [Clark County] Community Services.”