Game on! GRC-MoCo alive and well 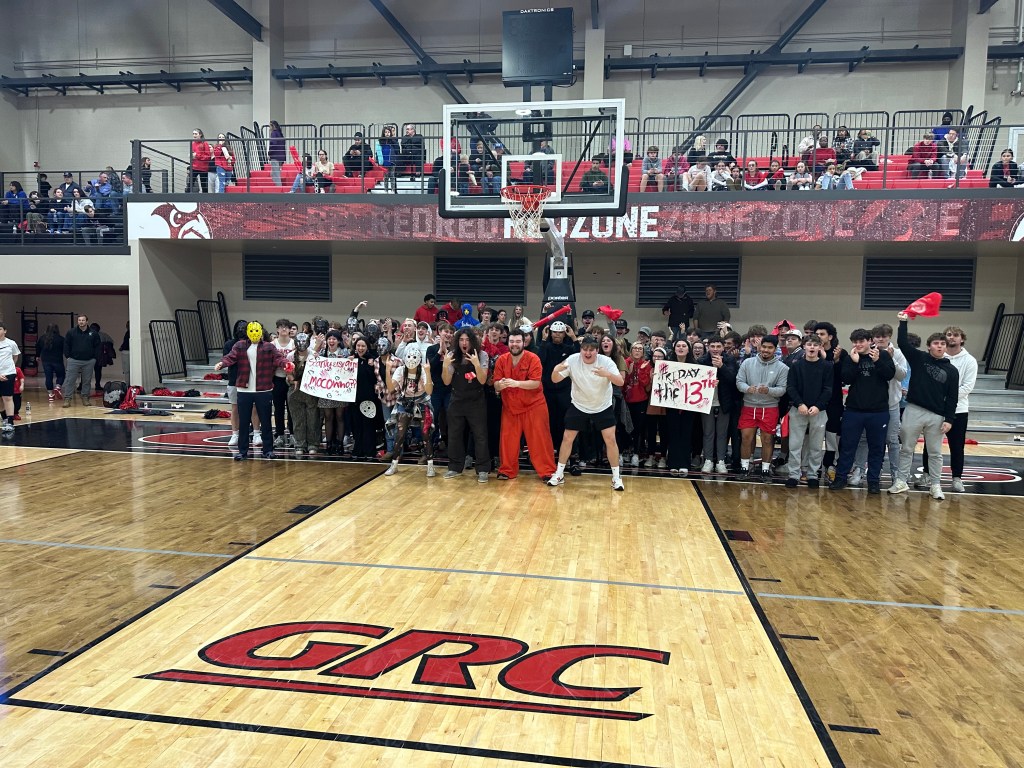 The GRC student section celebrated the latest chapter of the school's rivalry with Montgomery County with a "Friday the 13th" theme. (Photo by Matt Cizek)

On Friday night in Winchester, the student sections for both high schools were filled as the Cardinals and Indians clashed on the hardwood.

And, although GRC pulled away for a victory by both teams, there was no quit on the Montgomery County sideline or the student section.

“It turns everything more from a game into a personal [feeling],” said Jarrett Stidham, a senior baseball player at Montgomery County High School. “If we lose, it hurts really bad.”

When the basketball teams met they were looking at a matchup with a growing history.

Girls’ basketball was the 114th matchup between the Lady Cards and Lady Indians.

Boys’ basketball was the 149th matchup between the Lady Cards and Lady Indians, with a noteworthy 150th meeting later this season.

However, while the boys and girls from Winchester might seem to hold the edge in basketball at the moment, the same can’t be said across the board.

The Indians boys’ soccer squad has won the 39th District crown for the last ten years, including a 2-0 victory at Cardinal Stadium this fall.

The Indians girls’ softball squad is a perennial threat thanks to star players such as Reagan Oney, who led the team to a victory over the Cards in the 40th District Championship this season.

The Indians’ boys baseball team also was victorious over the Cards in the district championship, though the Cards advanced further into the regional tournament before being eliminated by Campbell County – who also eliminated Montgomery County one game earlier.

And while boys’ football might change from one year to the next, the Cards defeated the Indians this past year.

Geographically speaking, the distance between Mt. Sterling and Winchester is only about 20 miles. Therefore, a short drive along Interstate 64 is all but required.

Of course, the fan section of George Rogers Clark High School – which is sometimes known as the Get Rowdy Crew – also makes their presence known.

At Friday’s games, many got dressed in themed attire – including masks of the character Jason Voorhees from the “Friday the 13th” horror film series – to coincide with the date.

Senior Chase Hatton talked about how missing time in school during COVID helped shape the rivalry.

“That sophomore year was kind of taken away from us, so whenever we got back to school, it really meant a lot to me,” he said. “I really enjoyed it a lot more, and I didn’t take it for granted as much as I normally would.”

“This is a game that we look forward to. All of our students come out. We have a great time”, said senior Mason Johnson. “I’ve been coming to these games since I was a little kid, and I’ve always dreamed of being able to be in the situation for a big rivalry game like this.”

“It is as big as any high school rivalry there is,” he said.

The strongly competitive nature of the rivalry also yields impressive results on and off the field of play.