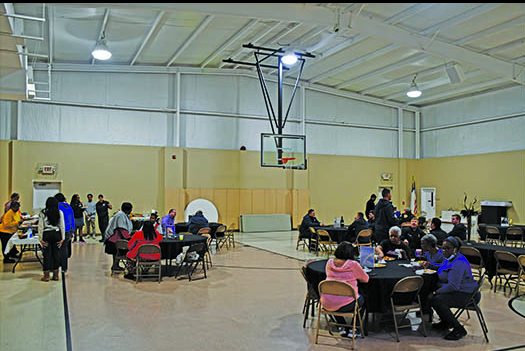 However, few remember that – on that dreaded day in Memphis, Tennessee – he had been present to support sanitary workers.

The staff and members of First Baptist Church certainly remembered.

From 12 p.m. to 2 p.m. on Monday, the church hosted a lunch for sanitation workers, first responders, and more as the country celebrated Dr. Martin Luther King Jr. Day.

“We are just trying to show our support for Martin Luther King Day [by] just having volunteers come out and serve our first responders, our sanitation workers, [and] our public workers,” said Angela Berry, the church’s ministry leader. “We just wanted to give back, and do something for the community.”

Marvin O. King is the pastor of First Baptist Church.

Speaking earlier in the day at the 40th Annual Martin Luther King Jr. celebration, he welcomed all to attend.

“All of you who are serving and laboring in our community for us to experience the benefits of your service, we want to honor you,” King said.

When guests arrived, they were greeted and sent to the gymnasium, where a bevy of tasty treats awaited them.

For the entrée, baked and fried chicken were available, as were macaroni and cheese, green beans, several fruits and vegetables, rolls, and more.

Once lunch was over, they could indulge in sweet treats that included cake, cookies, and cupcakes.

With water and juice available, attendees were sure to have their thirst quenched.

Though the church had previously taken part in events to celebrate Dr. Martin Luther King Jr. Day, this was the first time they’d hosted their own lunch.

However, the thought started several years ago when lunch was provided to sanitation workers at the city’s Dr. Martin Luther King Jr. service.

“When we decided to do something this year, we brought that back to the forefront,” Berry said. “We wanted to honor our sanitation workers, as well as our first responders and Public Works Department.”

Former Winchester City Commissioner Joe Chenault was one of many individuals making an appearance.

“Today’s a special day…it’s a good day for the community and for everybody”, he said.

Chenault spoke of the lasting value of Dr. King’s messages.

“It influenced you, where you could pass it on to people that don’t know,” he said. “Today, we’re more together…it was for everybody. If I had younger kids coming up, I would teach them who Dr. King was and what he stood for.”

At day’s end, Berry expressed gratitude that the staff and volunteers at First Baptist Church could accomplish the task while also seeking to fulfill what Dr. King might want to see.

“I’m just grateful that we have a pastor with a vision for the community to grow each and every one of us together,” she said. “[It] doesn’t matter [your] race or ethnic background, or anything like that. We just want to come together and be unified in Christ.”