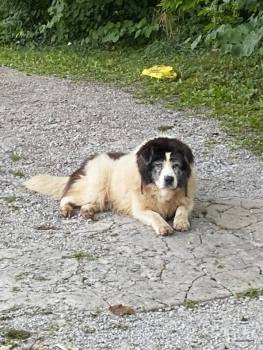 Romey, Winchester's unofficial town dog, was named by Holly Lovings after her deceased dog Romeo and for his tendency to roam. (Courtesty of Romey the Town Dog Facebook Page) 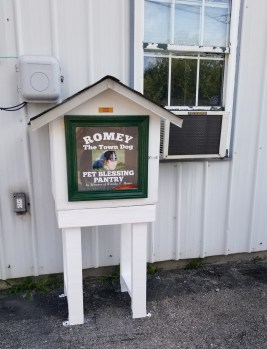 One local dog knows no master.

His name is Romey and to some residents, he is the “ town dog” and the namesake for the pet blessing box located outside of Tire Outlet on Maple Street.

Winchester resident Heather Rose, along with Maria Cupp, has helped care for Romey on a regular basis since 2017. The pair look for him every day to make sure he is fed and receives preventive medicine for fleas and worms.

Romey’s exact origins are a mystery, even to those that know him best.

“We don’t know the full story about him,” Rose said. “We think he came from a farm … The lady at the shelter said that he had gotten separated from his family and nobody could ever catch him so he ended up taking care of himself.”

The dog is about “13 or 14” years old and his breed remains unknown, Rose said. What is known is that he enjoys a taste of the good life.

“He’s the most spoiled feral dog I’ve ever seen,” Rose said. “He used to eat dog food and now he turns his nose at it; he won’t touch it.”

Need a shortcut around town? Watch Romey and you are bound to find them.

“He knows the town better than us. When you find him you cannot turn your head away. He knows all the shortcuts and he’ll disappear fast,” Rose said.

Rose and Cupp often talked about opening a pantry specifically for animals.

“We wanted to do a whole room,” Rose said. “We were actually trying to find a place and then COVID happened and everything got put on hold.”

A random encounter opened a window of opportunity that would make their vision a reality on a smaller scale.

Winchester resident Holly Lovings and her son, Michael Lewis, paid a visit to the blessing box on Hickman Street. A blessing box is an honor system pantry where those in need can get canned goods or hygiene products.

“We saw a family there and they had some small dogs in the car with them and he (Michael) was like ‘Mom it would be so cool if we could donate animal food; I wish there was a box to help animals’,” Lovings said.

Cupp, Lovings and Rose already knew each other after the three created a Facebook group dedicated to Romey called “Romey the Town Dog.” The three knew they could make something special happen, and they had plenty of help along the way.

Lovings said the community has been a great help with the project. A pet-specific box – Romey the Town Dog’s Pet Blessing Pantry – was built by Eva Bennett and her Girl Scout troop along with an anonymous benefactor. Rob and Samantha Landrum, owners of Tire Outlet, loved the idea of the project so much they granted permission for it to be located in front of their business.

Anyone with a pet is welcome to retrieve items from the box, and so far it seems to be a big hit.

“It’s empty every time. Everybody is already using it,” Rose said. “It’s been up for less than a week and I’ve already filled it twice.”

With items flying out of the community cupboard, donations are needed. Those wanting to donate may leave items in the box. If they cannot make it there, Rose said anyone interested in donating can contact her on the Facebook group.

Lovings said that food, toys and leashes are the best items to donate, and in the future those donating will find an important message.

“We want to include fliers about the importance of spaying and neutering pets,” Lovings said.

The community has risen to the occasion to help stock the box; The Girl Scouts have already held a food drive. The Landrums agreed to restock the box when a crate of donations arrives, Rose said.

Romey may know no master but caring for him has connected people who want to make a difference for his four-legged comrades.

To learn more about Romey and his blessing box, or for information on how to donate, visit Romey’s social media page by searching “Romey the Town Dog” on Facebook.